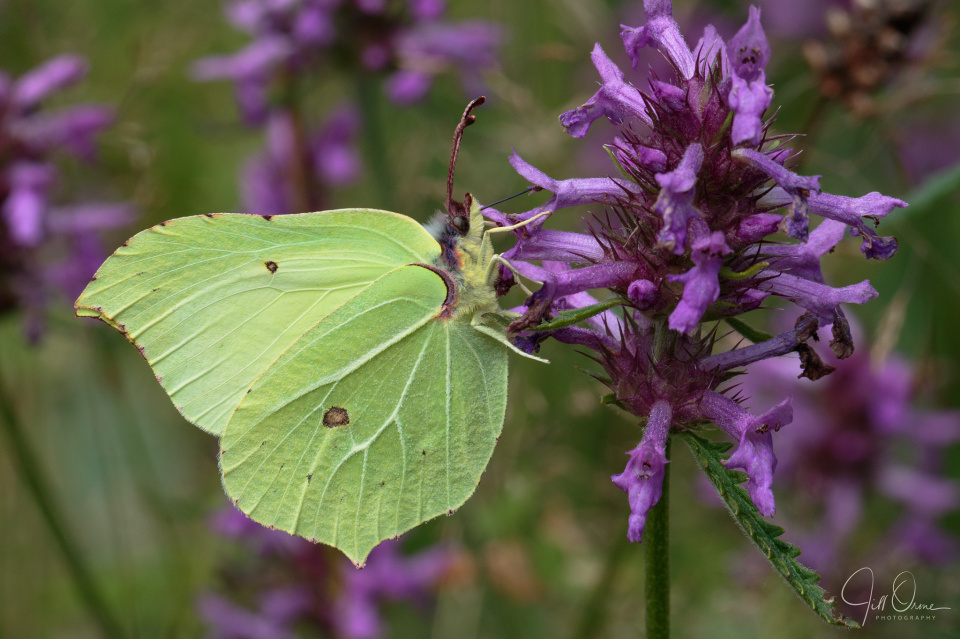 “Blue and green should never be seen,” said one of my mother’s friends, eyeing my blue and green checked trousers with distaste. I was only about nine at the time, and “answering back” was severely discouraged, but I thought it was a bizarre and unhelpful remark, and gave her a Special Look to convey my feelings. More than half a century later, I still wonder about the weird pronouncements that grown-ups seemed to make all the time during my childhood, and which I was apparently expected to treat as a rule-book for life. It’s probably why I’m so contra-suggestible now.

Anyway, I was kneeling down on the damp ride at Trench Wood this afternoon, trying to get a good angle on this quite skittish Brimstone, and I found myself wondering what the middle-class mothers of 1960s Lancashire would have made of purple and green. They’d probably have had a fit of the vapours – and to be fair, it’s not a subtle combination. But the thing I love is that the butterfly has those pink and purple accents, which tie it perfectly to the betony flower; please do look at this full-screen, if you have the time, and I think you’ll see what I mean.

I almost didn’t post the Brimstone, because I have a dragon – well, several dragons actually, but the one that nearly made tonight’s post is a Southern Hawker in flight over the pond. There were about half a dozen males working the area, and one female who was trying to oviposit without being spotted and grabbed again; a couple of the males kept coming over for a chat, which was charming, but they were being quite combative with each other, and were therefore tricky to photograph. Many attempts yielded just three keepers, my favourite of which I’ve posted to Facebook, if you’d like to see it.