I’ve always loved dogs. We didn’t own one when I was a child, but I had a copy of the Observer Book of Dogs, and I spent hours poring over the descriptions of the different breeds and marking up the ones I intended to own as soon as I was in charge of my own destiny. Suffice it to say that I would have needed a very large house. Since achieving something bearing a passing resemblance to adulthood I have owned an English Pointer, a Petit Basset Griffon Vendéen and a Jack Russell Terrier. I still covet an Irish Wolfhound, but the Master of the House prefers small dogs (or better yet, no dogs at all), so I may have to settle for a Wire-haired Dachshund.

For many years my self-education at the hands of the Observer Book of Dogs stood me in very good stead, and I could accurately identify on sight virtually any dog I saw. These days that is more difficult, and I learned a painful lesson when I asked a woman what the cross was in her Labrador, only to be told icily that it was in fact a breathtakingly valuable champion Chesapeake Bay Retriever. These days I tend to fall back on, “That’s a very handsome dog – what is it?” unless I’m very confident indeed!

In January 2016, at the start of the year-long workshop A Year With My Camera, the participants were tasked with making a collection of themed photos across the year, and partly as a nod to my eight year old self and partly because of my attachment to the work of The Dogist, I decided to collect dogs. I’m conscious that I often use the camera as a defensive weapon, dividing and protecting me from the rest of the world while I’m observing it, so to challenge myself further I decided that there would be no guerilla shots in this collection; instead I would make a point of talking to the dogs’ owners, asking their permission to photograph their fur babies, and finding out a little about my subjects. The collection is building up in an album in the workshop group and on my own Facebook page, but I thought it would also be nice to feature it here. I’ve chosen my favourite of the shots of each dog for this page, but in some cases there are others in my Pets gallery. 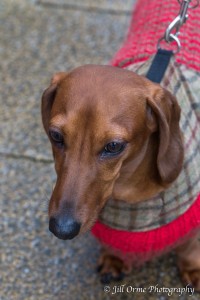 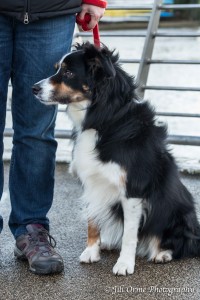 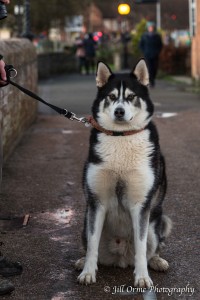 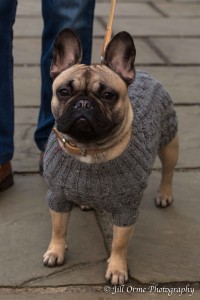 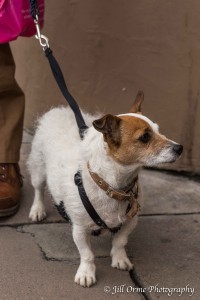 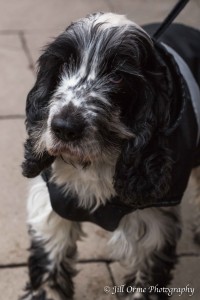 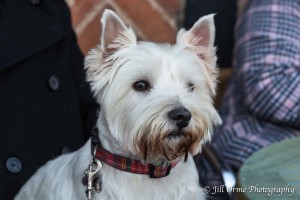 Pippa: 4 year old West Highland terrier, Stratford-upon-Avon. “We can’t leave her on her own. Ever. She wants to be with people ALL the time.” 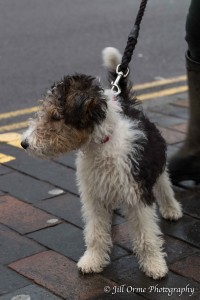 Bertie: 15 week old wire-haired fox terrier, Stratford-upon-Avon. “We’re having to do a lot of training – there’s quite a lot of terrier in these.” 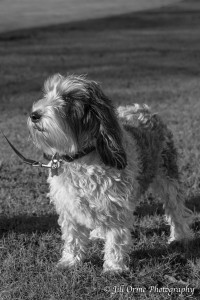 Flick: 6 year old petit basset griffon Vendéen, Stratford-upon-Avon. “She likes barking at the moon late at night. And her best friend is a Grand called Gavin: she likes hanging on his ears.” 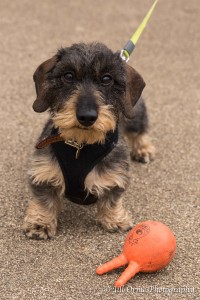 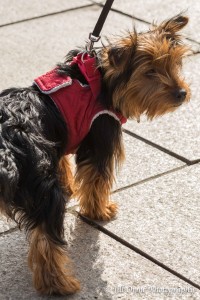 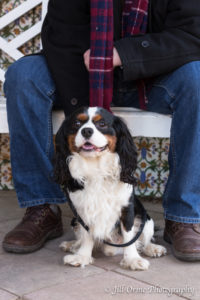 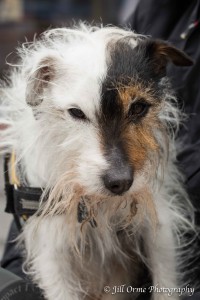 Scampi: 13 year old wire-haired Jack Russell terrier, The Vale, Evesham. “Oh sorry – he’s growling. …He’s quite protective, and he thinks you might be going to take me away.” 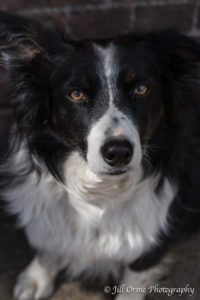 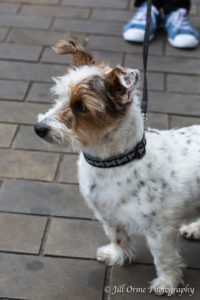 Archie: 5 year old Jack Russell terrier, Stratford-upon-Avon. “He’s so affectionate. And so enthusiastic about everything. Sorry – he normally poses.” 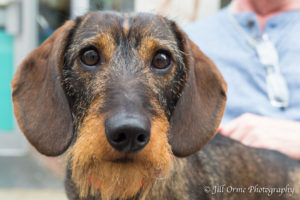 Ross: 1 year old miniature wire-haired dachshund, Evesham. “Ross – as in Poldark: we’re Cornish, you see. I’ve never had so many attractive ladies come up wanting to talk to me – while my wife is shopping I just sit like this with him, and ladies rush over to make a fuss of Ross.” 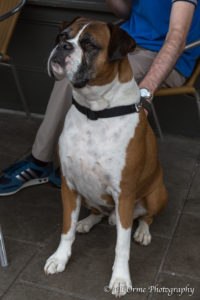 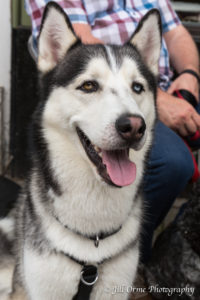 Nero: 2 year old Siberian husky, Tewkesbury. “Is he blind in that eye?” “No, he’s bi-eyed – he can see perfectly well. One of his brothers in the litter is also bi-eyed, but the other way round. He’s very friendly, but he sometimes expresses that by jumping at people, and they don’t always like it. They’re high-energy dogs, and you have to exercise it out of them. But he’s lovely – it’s a breed you can fall in love with.” 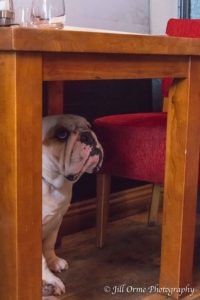 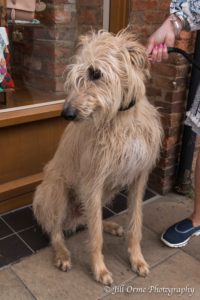 Fife: 4 year old deerhound lurcher, Stratford-upon-Avon. “He’s pretty easy really. We live in Scotland, and he usually just runs himself out on the beach, and then sleeps for the rest of the day.” “Is he cat-safe?” “Well, we did have four cats – though they’ve all died now – and he was fine with them. They used to go to sleep on him.” 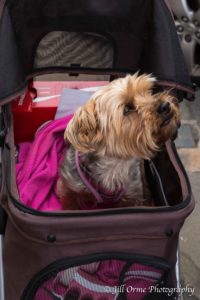 Fudge: 8 year old Yorkshire terrier, Stratford-upon-Avon. “It’s like having a third child, really. She’s eight, so she’s not a baby, but I suppose we do treat her like one. We have a boat, and she has her own seat in the front, so she can see where we’re going. You’re spoilt, aren’t you?”