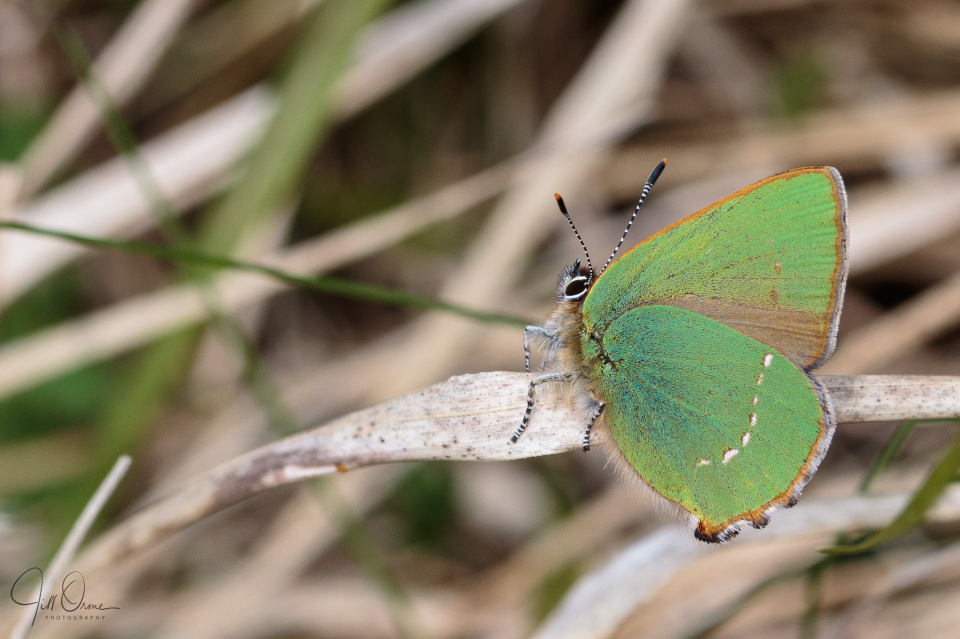 “You’ve been having that conversation with yourself for a good ten minutes now!” said R.  Actually, it was more like an hour.

Stay in or go out? Cheltenham or somewhere else? Too early for Green Hairstreaks at such a high site, or not? They were reported yesterday in Worcestershire, and earlier this week up in Lancashire…. Maybe the Worcestershire site? But I know Prestbury Hill really well…. But it’s a stupid distance to go if there’s nothing there…. But if I don’t go, I won’t know whether there’s anything out there or not……. 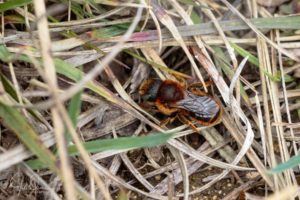 As you can see, in the end I went. I initially found nothing other than a few bees and a single Brimstone, despite gingerly descending the entire hill, and was cursing inwardly, and not looking forward to going home and reporting a wasted trip. But then I spotted the very handsome bee in my extra (which was a great deal less keen on me than I was on her), and was pursuing her, nose to ground and bum in air, when a voice behind me said “Found something interesting?”. Straightening carefully, I turned to the chap who’d just had a perfect view of my least best aspect, and said that I thought it was an Osmia*, though I wasn’t sure which species. It turned out that he was there to do a butterfly transect on behalf of the local branch of Butterfly Conservation, and had crept up on me because he was hoping that I’d found a Green Hairstreak; after chatting for a few minutes we decided that it was clearly too early for anything other than the Brimstone to be about, and agreed to go our separate ways, but to call each other if either of us did spot anything worth recording.

I hadn’t gone more than half a dozen steps along the track when I spotted a tiny fluttering movement, and called to let him know that I’d found something, and by the time he arrived at a trot the something had turned out to be a Hairstreak. Within about a minute we’d found four, all so pristine that I think they must have emerged today: Green Hairstreaks spend a lot of their time hanging out on hawthorn trees, against which they’re beautifully camouflaged, and their wings very quickly become damaged through brushing against the thorns. Being fresh, they were extremely skittish and disinclined to be photographed, and we spent several minutes scrambling up and down a quite steep section of slope after them, but as soon as we’d managed some reasonable shots we left them in peace so that they didn’t expend any more energy trying to evade us.

This is a very early appearance for a butterfly that’s usually said to emerge in the second week of May (which is when I first saw one last year). If the warm spell holds through the weekend I’ll go back to Prestbury Hill early next week, in the hope of more Hairstreaks and better photos – and to see if the Dukes of Burgundy are also going to turn up early this spring.

* After looking it up, I think the bee is an Osmia aurulenta (gold-fringed mason bee) – which would be a first record of this species for me – but I’m still waiting to have this confirmed.