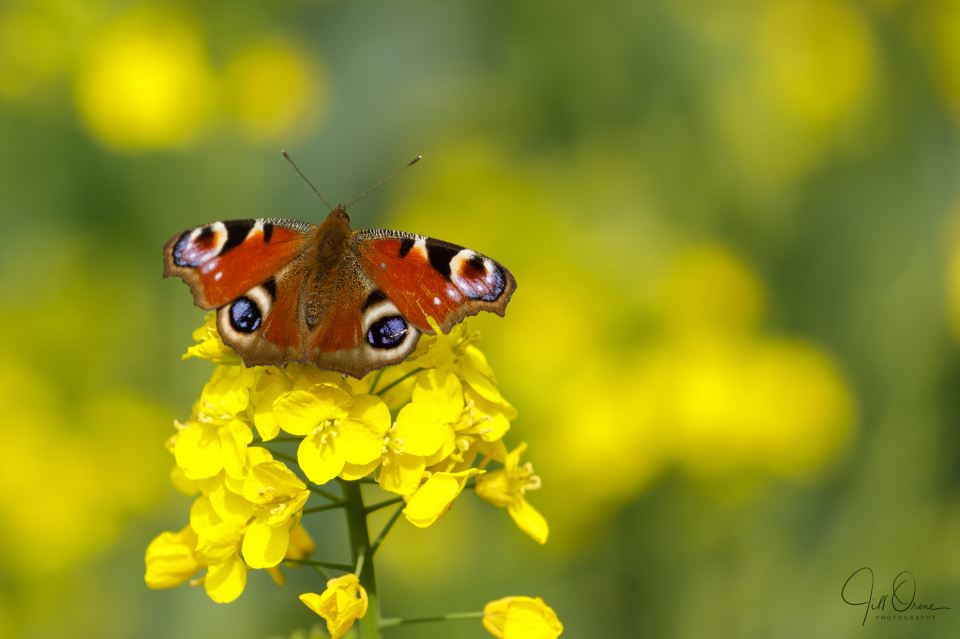 As you probably know, there’s a photographic by-law that makes it obligatory for anyone who fancies themselves with a camera to go out each spring and attempt to take an interesting shot of a rapeseed field. I hereby submit my effort, in the hope that it will be accepted and I won’t have to spend another hour this year gazing at acres of vivid, sunlit yellow. When I closed my eyes to rest them, the whole world turned purple.

But despite the eye strain, it was a good day.

I went up to Kemerton Lake to check on the grebes, and though there are still no chicks about, loud defending of nests is still happening on both sides of the main hide, so I remain hopeful. While I was on the boardwalk I heard, though couldn’t see, what I’m pretty sure was a reed warbler, chuntering away in the reed bed – so after hearing that they’d turned up at Slimbridge on Monday, I’m optimistic that they’re also now arriving back in the Shire.

Walking out of the reserve I came across a couple of Speckled Woods having an argument, and got my first record of that species this year. The path back to the village runs between two rape fields, and as I turned onto it I realised that they were absolutely humming with insects, so I spent a while taking photos of bees and hoverflies, before being distracted by several Peacock butterflies that were alternately basking on the flower heads, and flying about squabbling with each other. I wound up chasing back and forth along the path to try to catch up with the ones that settled, and took far too many photos (with both cameras), but I am quite pleased with my entry for this year’s Rapeseed Challenge, and I hope you like it too.

But probably my favourite shot of the day is the extra, which is a Holly Blue settling down to roost (appropriately) on our holly tree. As soon as I arrived home from Kemerton I went out to check the garden for bugs, and almost immediately saw my first Holly Blue of the year – but it didn’t settle, and I only managed a distant record shot. I then realised that there were actually two of them circling the big laurel tree in the middle of the garden, but neither slow enough nor low enough for me to photograph. I’d given up on them and was sitting on the patio with R, enjoying the evening sunshine, when one flew past my head and disappeared into the holly, and when I climbed up onto the patio wall with the camera I found that it had settled in quite a nice position to have its portrait taken. I wouldn’t normally use the long lens on something the size of my finger nail, but short of fetching a step ladder I couldn’t get near enough to use the macro – and on the plus side, 560mm does give you artistically shallow depth of field. 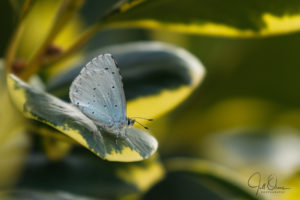