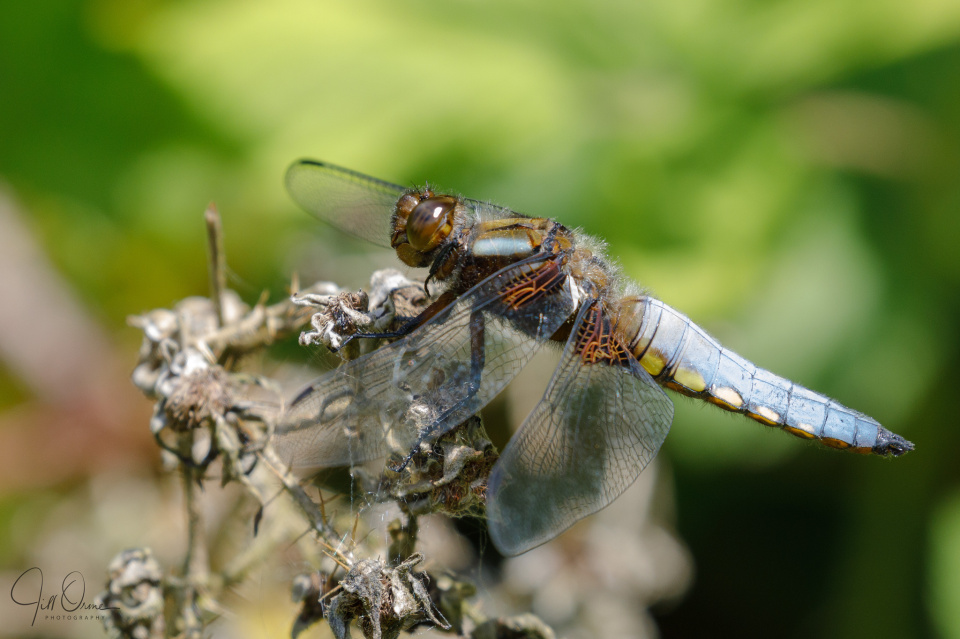 “Why don’t you go to Grove Hill?” said R, who hasn’t got where he is today without being able to recognise a wife who’d be more loveable were she several miles away.

Last summer I was a little surprised that virtually all of dragon action at Grove Hill took place at the smaller pond near the entrance: the larger, further pond was virtually devoid of Odonata. By the time I began going there I’d missed all the early summer species, and I wondered at the time which site they had favoured. Today there was just one damselfly at the small pond, but I hadn’t even completed one circuit of the big pond when three male Broad-bodied Chasers shot past me, giving me my answer.

They’re not called Chasers for nothing – especially when they’re in competition with each other – and for the next half hour all my attempts to get one of them in the frame fell hopelessly short. It was only by chance that I discovered that when not patrolling or fighting they liked to perch on a nearby bramble hedge; unfortunately it provided a messy environment for photos, but in the circumstances I was hardly going to complain. This is the dominant one of the three, resting while keeping a sharp eye out for either of the other two daring to approach his pond. 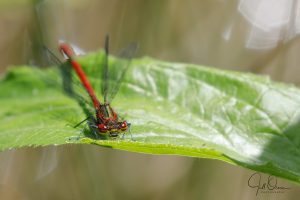 I’d only taken the big gear with me today, and I did better with the dragons than with the fresh Azure Damselflies that were fluttering around the margins of the pond, and trying to avoid being chased down and eaten; the next time I go I’ll take the macro as well, in the hope of getting better images of them. But I do quite like the portrait I took of a smiling Large Red Damselfly, which is today’s extra here. My third favourite shot, of a Common Carder emerging from a flag iris, has gone onto my Facebook page, if you’d like to see it.