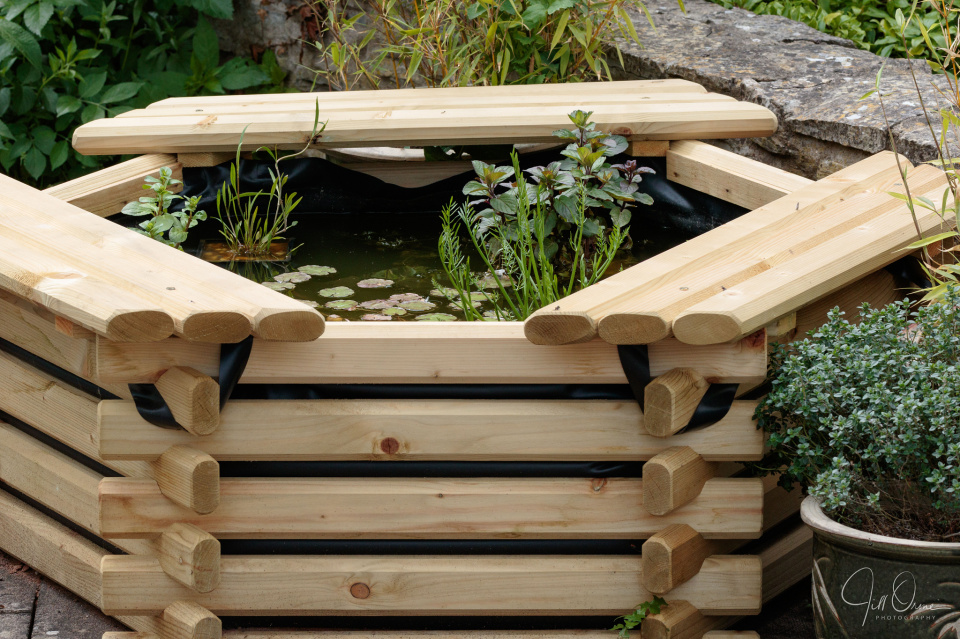 As it’s now five weeks since R installed it, I thought it was about time I showed you how the patio pond is getting on. Not least because it was so vilely cold today that I could hardly bear to be out of the house for more than a couple of minutes, and neither could any of my usual subjects.

From the left, the plants you can see are:

Veronica beccabunga – brooklime. This marginal plant is said to be favoured by Odonata as an oviposition site – so fingers crossed about that, obviously. I have one in the wild pond too, but it’s sitting deeper than this one and something is eating it, so I think I may have to lift it higher to give it a better chance.

Ranunculus flammula – lesser spearwort or banewort. This is poisonous apparently, but presumably not to pond life. As you’d expect from its Latin name, the flowers will look like buttercups.

Nymphoides peltata – water fringe or floating heart. We decided not to grow ornamental water lilies, so I’ve chosen this instead. Its leaves grow up to the surface amazingly quickly – a new one reaches the surface every couple of days – and they’ll provide important surface cover and shade. In time it should also produce small, yellow flowers with fringed petals, that look a little like tiny water lilies.

Oenanthe fistulosa – water dropwort (front). I like the feathery leaves of this marginal plant, but I’m also looking forward to its flowers, which look rather like scabious.

Mentha aquatica – water mint (back). This one will produce purple flower heads like small bottle brushes, which I know (because my neighbours have some in their pond) are adored by pollinating insects.

There’s also a small Myosotis scorpoides (water forget-me-not) over on the right-hand side, but hidden by the seat in this photo. And I’ve dropped quite a lot of Ceratophyllum demersum (hornwort) into the water; this is a free-floating oxygenator, which should help to keep the water healthy and reasonably clear.

All these plants are native species, which seemed like a good choice from an ecological point of view. Apart from the hornwort and the water fringe they’re all shallow-water marginals, and because of the construction of this pond – a liner sitting inside a frame, essentially, with no inbuilt shelves – I’ve had to use inverted plant pots to lift their baskets up to the appropriate depth. So far we haven’t seen as much insect activity at this pond as at the other one, but there are some tiny larvae swimming around now, and quite a few small diving beetles have also moved in.

I’m waiting for the plants in the wild pond to grow up a little more, but when everything looks better settled I’ll post a photo of that one too.