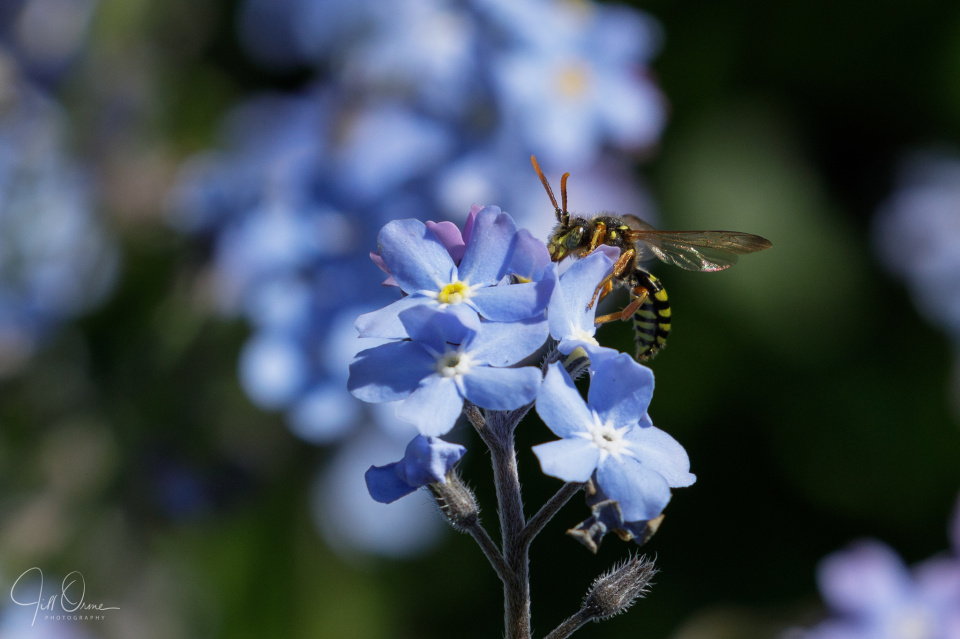 I did a lot of gardening yesterday (eeeurgh), and this morning I was feeling tired and a bit waspish, so I decided to give myself a break and just let the day flow, rather than trying to achieve anything. As it was, by the time R and I had received our one grocery delivery of the week, just after breakfast, and had crammed seven days worth of food into fridge, freezer and cupboards, it felt as though we’d done quite a lot.

In furtherance of my easy day I thought I’d see what I could capture with the big camera and long lens, rather than trying to chase down small things with the macro as I’ve been doing for the past couple of weeks, and to my surprise I ended up with quite a few photos that I really like. This is a nomad bee, Nomada goodeniana, and as you can see from the fact that he’s feeding on forget-me-not, he’s very small – only about a centimetre long, in fact. They’re quite skittish and not at all keen on humans, so being able to stand back and allow him to feed undisturbed worked well here for both of us.

This afternoon I was sitting reading on the garden bench under the apple tree, and keeping a vague eye on what was flying around the upper garden, when I noticed that about every half hour a female Orange Tip would arrive and flutter around the honesty in the nearby border for a minute or so before disappearing again. The light was very harsh on that patch of flowers, but on one of her visits I rattled off a few frames for recording purposes, and when I processed them this evening I discovered that she had been ovipositing. When I posted the image in my extras to the West Midlands Butterfly Conservation Facebook page, Mike Williams confirmed that honesty is a common larval foodplant for this species, so tomorrow I’ll go out with a magnifying glass (and the macro) and see if I can find any of her eggs. 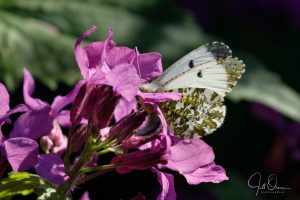 Once again, being stuck at home has caused me to learn something new – and in this case to think about the need to leave any dead honesty stems in place until next spring, in case they’re hosting Orange Tip pupae. If you’re interested, you can read all about the life cycle of this butterfly on the UK Butterflies site; there are good photos of the eggs and caterpillars, and of the pupae, which look rather like thorns on the foodplant stems.

Finally for today, I’ve posted shots of a couple of the hoverflies that were stalking me for much of the day to my Facebook page, if you’d care to take a look.