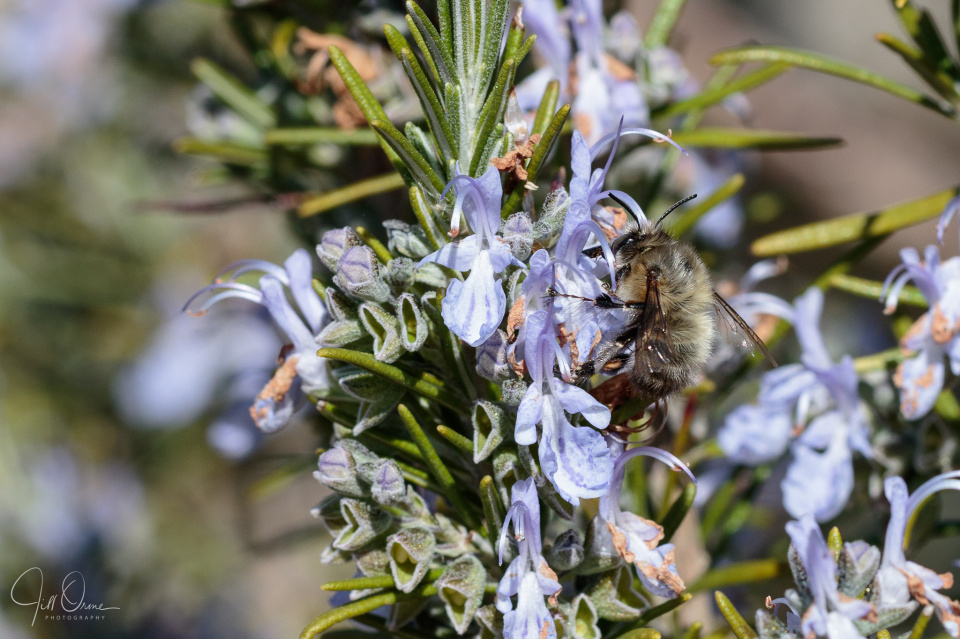 I said the other day that I was only seeing female hairy-footed flower bees now, and that I feared the males had died off. Happily it turned out that I was being too pessimistic: there are far fewer about than, say, a month ago, but one or two can still be found, and having lost much of the energy of their youth, the survivors are rather easier to photograph than they used to be. It’s noticeable that they’ve all faded to a fairly uniform silvery grey colour now – if you compare this photo with one I took last month of a fresh specimen you’ll see the difference – but I rather like this look, and above all I’m happy that they’re still around.

I’m posting two extras today, which I actually took yesterday, of another bee feeding from the same rosemary bush, and which confused me at the time because it clearly wasn’t a plumpie and yet looked very like one. I put the photos on the BWARS page on Facebook for identification, and I’ve now been told that it’s a female fork-tailed flower bee, Anthophora furcata, which is a species I’d never recorded before. I was (probably excessively) excited about this, and I’ve spent quite a bit of time today searching for this bee with a view to getting more detailed photos, but without success. 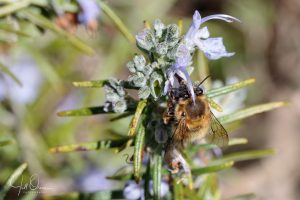 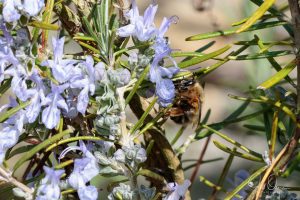 A. furcata is not at all rare, being found across much of mainland Britain, and it can thrive in a wide range of habitats, provided they contain the rotting wood in which the females excavate their nests. I’m told that this was an early sighting because it’s more a summer than a spring species, so with luck I’ll have other opportunities to photograph it, but for now these shots will have to do. The first one shows that although the colour is similar to that of a fresh male Anthophora plumipes, this bee lacks the yellow face and the middle legs don’t have the characteristic long hair fringes of the male plumpie. In the second, profile, shot, you can see that this is a female from the ginger pollen brush on her rear leg. Sadly the photo doesn’t show the fact that the very end of her abdomen is red, but if you’re looking on a big screen you might just be able to make out the two tiny projections that give the species its name. For a better view of this interesting bee bum, I recommend that you check out the NatureSpot page.