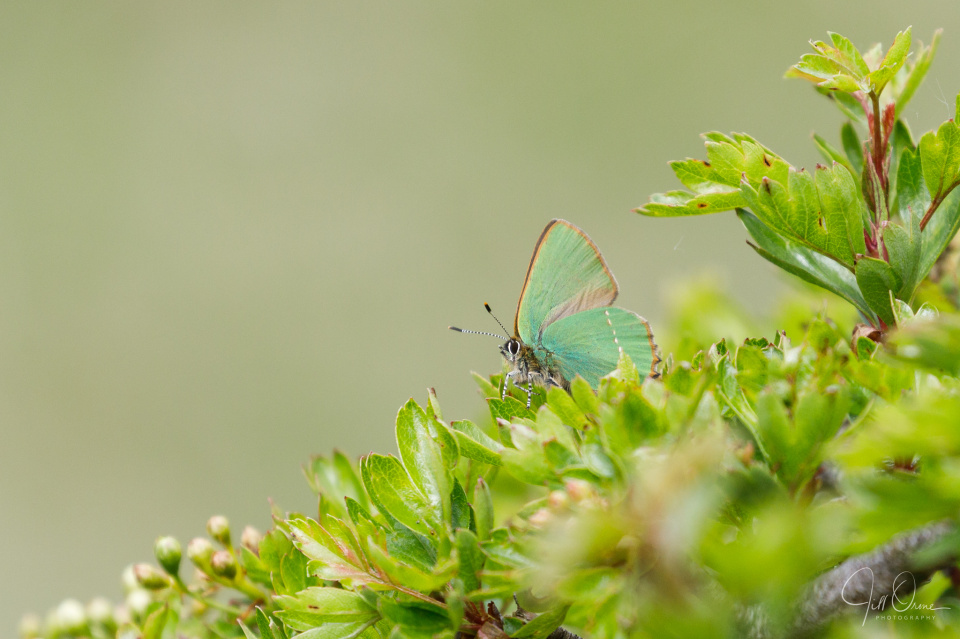 To be fair, it wasn’t just this Green Hairstreak that was uncooperative today: almost everything I tried to photograph turned out to have different plans. It’s telling that although I had the macro with me I was never able to use it, because nothing would let me get within that kind of range – so it’s a good thing that I also had the big rig with me, or I’d have come home with no photos at all.

Having said which, I do actually quite like this image, because it demonstrates how well camouflaged these tiny butterflies are when they sit on a fresh hawthorn shoot. In fact, when they’re sitting high up in a large hawthorn they’re almost impossible to spot, but luckily this is just a sapling, and the butterfly was pretty much at my eye level as I came round a corner. I managed just four frames before it removed itself to a place of safety. 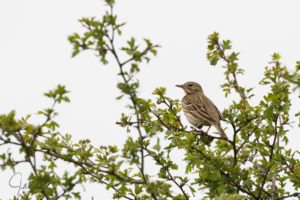 The other good thing about having a long lens with me was that when I lost patience with the butterflies I was able to stalk a few of of the many birds living at Prestbury Hill, and increase my tally for the year. The least skittish of these was the tree pipit I’ve put in as an extra, and which is a first record for me of this species. This handsome bird will only recently have arrived back from wintering in Africa, and in the few months that it’s here will be looking to mate. It’s one of the species that performs a song flight, but I didn’t witness that today, so there may not yet be enough birds back on the reserve for competition to have begun. Tree pipits are ground nesters, laying their eggs in a scrape in the ground; at Prestbury you have to be mindful of this when walking around at the top of the hill, where there’s an area of scrubby gorse that provides cover for a large number of nests each spring.