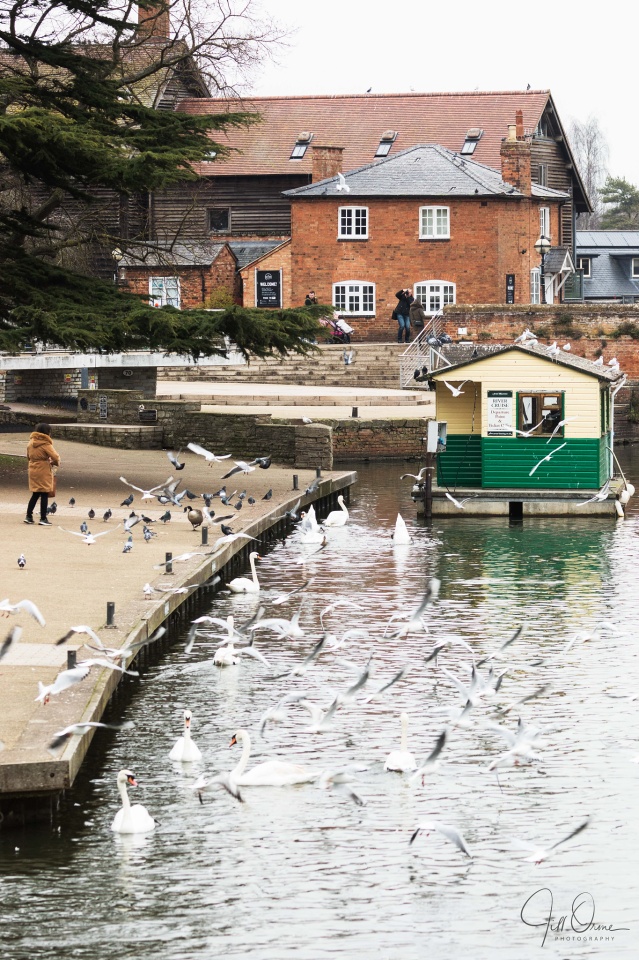 I had to go to Stratford this morning to buy some shoes – an errand on which R conspicuously failed to offer to join me, presumably because he knew how likely it was to end in bitterness and recrimination. I’m not one of those women with a thing about shoes – in fact the only shoes that really please me are good walking boots, and this was not that kind of shopping – and we both knew that I was likely to find the whole business of trying to balance the comfortable/smart/affordable equation fairly irritating. I decided to treat it as a quest though, and in the end I was able to award myself coffee and cake points for succeeding in under an hour and without significant loss of temper.

I’d parked the car in Old Town, and walked into Stratford along the north side of the river. It was another dull day, and not much was happening in the RSC gardens or out on the river to make me want to lift the camera, but as I reached the end of the theatre café boardwalk I saw a flurry of gulls and pigeons lift off as the woman on the left began throwing bread, and a chap with a camera up on the Old Tramway Bridge photographing the action, so I quickly snapped the scene. The green and yellow hut on the river, which is a ticket booth for short boat trips, is the building that provided the Pucci reflections in yesterday’s blip; the colours look much better today, which I suppose must mean that it was a brighter day, even if it didn’t really feel like it.