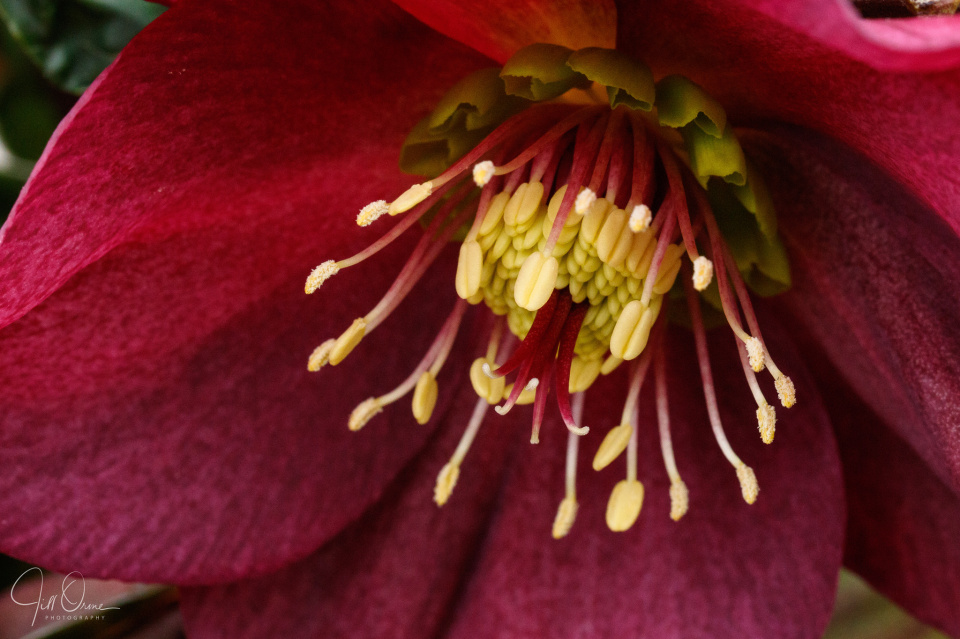 I happened to spot this lovely deep red hellebore on my way into the supermarket this morning, and somehow by the time I’d finished the shopping it had managed to insinuate itself into my trolley. That’s my story anyway, and I’m sticking to it.

I have a number of hellebores already, and I realised without even checking that this one had been bred on quite a long way from the basic Christmas rose (Helleborus niger) or Lenten rose (H. orientalis). It turns out to be something called H. x glandorfensis, which is a cross between H. x ericksmithii (itself the result of crossing three different hellebore species), and H. x hybridus, which is a hybridised form of H. orientalis – so a lot of nursery work has gone into its production. My botanical knowledge is very basic, but I think all this hybridisation probably means that unlike the more basic forms, which seed themselves pretty freely around the garden, this one is unlikely to seed, or to produce something that looks like this if it does. Provided it survives and thrives though, I can live with it failing to propagate itself.

If you don’t know much about the structure of hellebores, I think they’re quite interesting. The dark red things that look like petals are actually sepals, or modified leaves, while the petals have been adapted into those short green tubes, which are called nectaries, and as you’d expect from the name produce nectar to lure in pollinating insects. In the very centre of the flower are the long carpels, red with sticky white tips in this case, which are the female pollen receptors. All the structures between the carpels and the nectaries are stamens – the male pollen-producing organs – in various stages of development; the outermost ring have already finished growing, and the anthers have lost their enclosing caps and are releasing their pollen.

Once the anthers have shed their pollen they shrivel and fall away from the flower, and eventually so do the nectaries, leaving just the outer sepals and the carpels, which swell as seeds develop inside them. By this stage a hellebore flower looks rather bare and odd, but it’s still functional, and won’t shrivel until the whole of that year’s growth dies back.