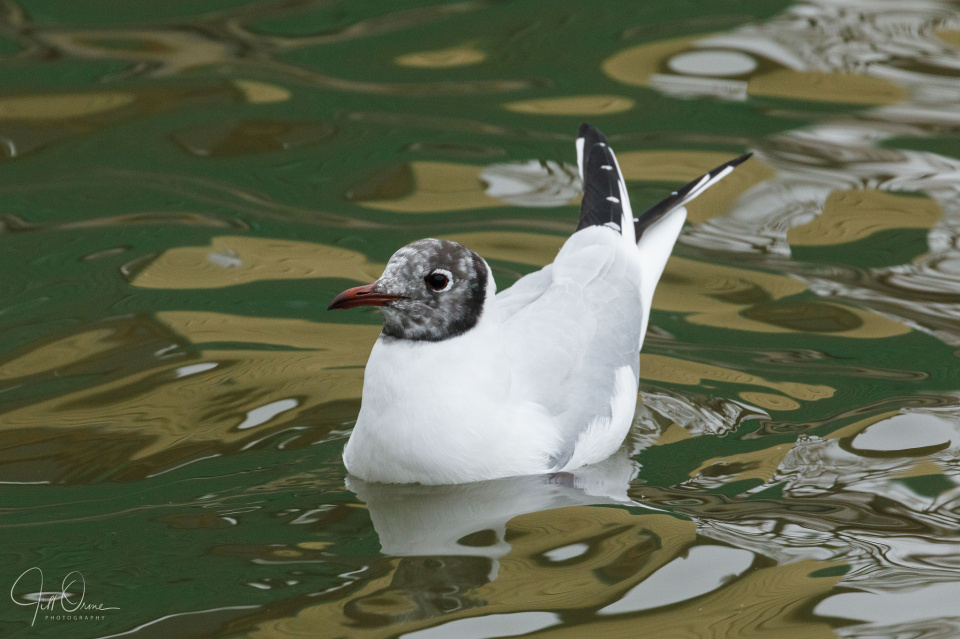 “He’s the one I want,” I said to R, trying to track this individual in the midst of a feeding mêlée, “because he’s almost into his breeding plumage.” In truth though, male and female black-headed gulls are identically marked, and I have no idea which this was; I suspect only another gull would know.

There are around 140,000 resident pairs of black-headed gulls in this country, breeding in colonies on both fresh-water and coastal marshes, and around lakes, reservoirs, and flooded gravel pits. In winter these colonies disperse and the gulls spread out to winter feeding grounds all across the country, with European migrants swelling the total population to over two million birds. By the time this bird’s head is entirely chocolate brown, except for ring of white feathers and red skin immediately around its eye, it will be thinking of moving back to its breeding territory. By April all the black-headed gulls will have left Stratford-upon-Avon, and they won’t return until the autumn.

R and I were in Stratford – in principle – to pick up some items from Waitrose that I wasn’t able to have delivered yesterday, but just as importantly we wanted to get out of the valley, which was sunk in deep gloom, and spend a couple of hours somewhere brighter. In the event Stratford wasn’t all that much brighter, as you can see from the water here, which is reflecting a bright green and cream shed but has wound up looking like the worst kind of 1970s wallpaper. Nonetheless, it wasn’t home and it had cake, so we still felt that on balance we’d won.