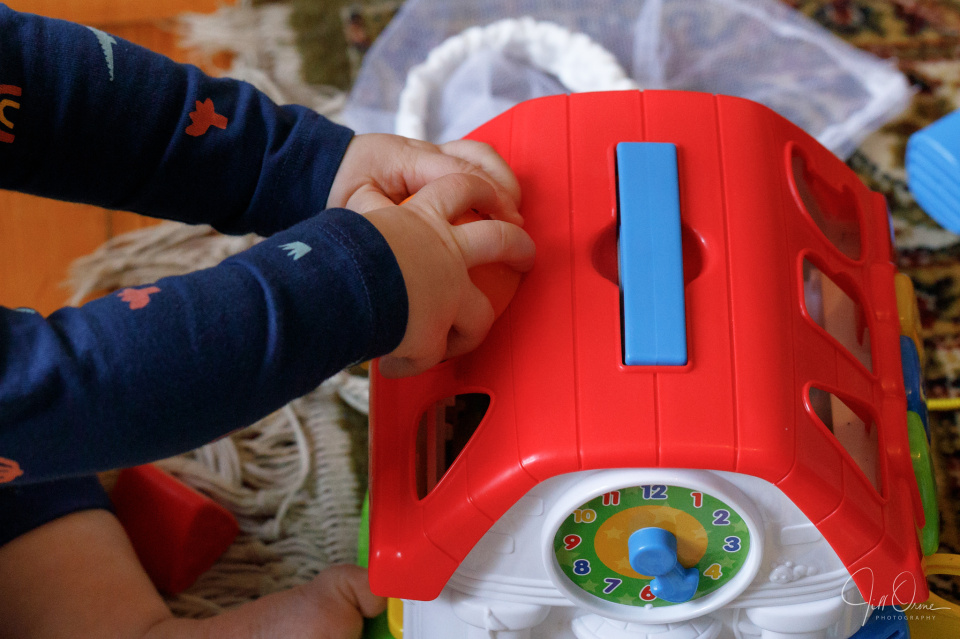 R and I spent the day over in Wales with Baby B, having not seen him for almost a fortnight, and had absolutely the best time.

As on out last visit, we spent quite a bit of time sorting things out and putting them into other things, then taking them out again. The game with the wooden invertebrate blocks was still in favour, as was this shape sorting toy that he was given for Christmas by my sister’s family – he’s now very quick indeed with the easiest shapes, such as this circular block, though there’s still a slight flavour of Gumby Flower Arranging to the way he deals with the more complex ones. He also invented a game with some felt finger puppets and an old jar that reminded me quite strongly of Eeyore and his balloon.

He can now say “Dada”, “Mama” and “Baba” (or something very like it) when you ask him to, though only if he feels like it, obviously. If he does feel like it, he smiles sweetly at you before producing his word, but if he doesn’t he simply blanks the request. And R and I were charmed, and frankly a little bit tearful, to see that he can now sign the word “more” by touching his bunched fingertips together if he’s eating and wants to signal that he’s still hungry.

B’s most impressive new skill of today though, was standing up on his own. If he’s sitting on something that’s just the right height, with his feet reaching the floor (each time he did it today he was sitting sideways on the leg of of a grown-up, who in turn was sitting on the floor), he can now try to stand unsupported – and the grin of triumph that splits his face each time he manages to straighten up and find the point of balance is a wonderful thing to see. Now that he’s working hard on this, I’m sure it won’t be long until he’s taking his first unsupported steps.