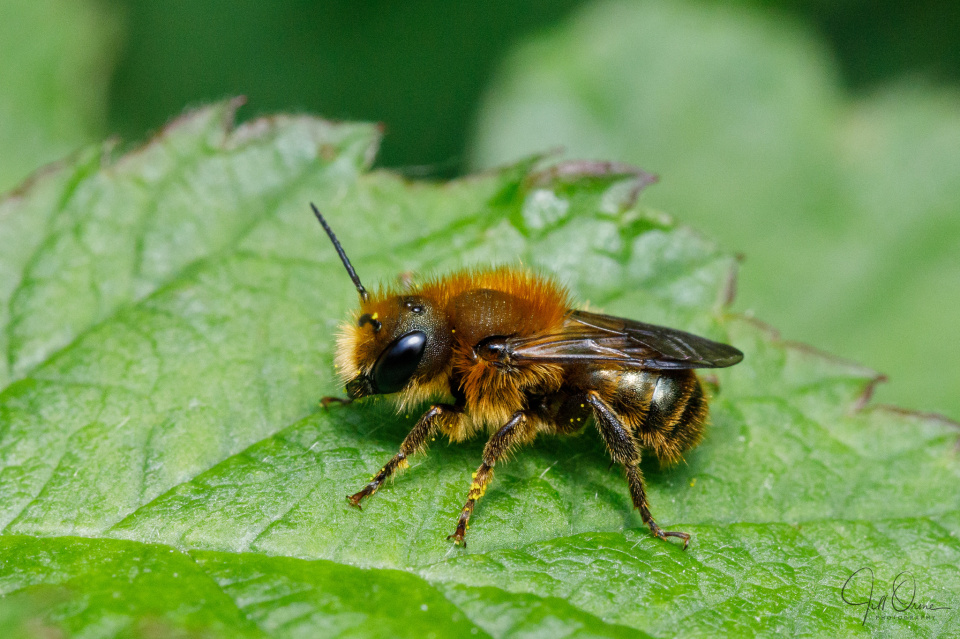 If someone filmed me walking round my garden, looking for invertebrates, and then speeded up the film, I think you could probably set it to the Benny Hill Show theme music: there’s so much stopping and starting, double-taking and reversing, and so many sudden changes of direction and speed, that it must all look rather bizarre. I was marching through the secret garden this afternoon, on my way back to the house with the firm intention of getting my car keys and going out somewhere more interesting, when I spotted something gleaming in the fruit bed, skidded to a halt, backed up, and homed in on first one and then a second tiny, shiny, ginger bee.

Both the new arrivals were so pristine that they must have been very newly emerged, and both were rather dozy and maybe a little bemused, because they sat entirely still while I approached closer and closer, right to the inner limit of the macro. I only let them alone when I spotted a third shiny thing, which turned out to be an as yet (and possibly for ever) unidentified digger wasp. For about quarter of an hour the secret garden became the most interesting place in the county.

Both my bees turned out to be male specimens of a species I’ve never recorded in the garden before, though I have seen females around the village, collecting pollen from knapweed and thistles. Osmia leaiana is common across the southern half of Britain, and exploits any habitat where its favoured pollen source can be found, nesting in cavities in walls, trees, or dead wood, and frequently in bee hotels. This little chap is about 6mm in length, while his eventual mate will be around one centimetre long, similar in general appearance but with a vivid ginger pollen brush on the underside of her abdomen.

My second-favourite garden subject of the day has gone onto my Facebook page, if you’d care to take a look. I did eventually make it out of the village, but only as far as Barton, just over the border in Warwickshire, where I took a very enjoyable walk along the bank of the river Avon. It was literally teeming with Banded Demoiselles – I don’t believe I’ve ever seen so many in one place before – and there were still numerous mayflies around, doing their strange pogo dance. I do like a mayfly, and I’ve added a photo of what I think is an Ephemera vulgata as tonight’s extra. 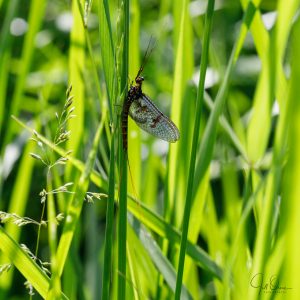 This poor creature was taking five to compose itself after a nasty incident with a group of male Banded Demoiselles, which I think had somehow mistaken it for a receptive female and set upon it in a mating frenzy. The winner carried it off in his claspers (though which bit of it he was holding onto I couldn’t see) and flew around with it for a while, swinging it back and forth as they will do with a female who doesn’t immediately form the mating wheel, before apparently realising his mistake and dropping it. The mayfly plummeted into the grass and stayed there – understandably – though I pointed out while I was causing it further stress by taking its photo that things could have been worse: at least the clasper end of a Banded Demoiselle doesn’t chew.