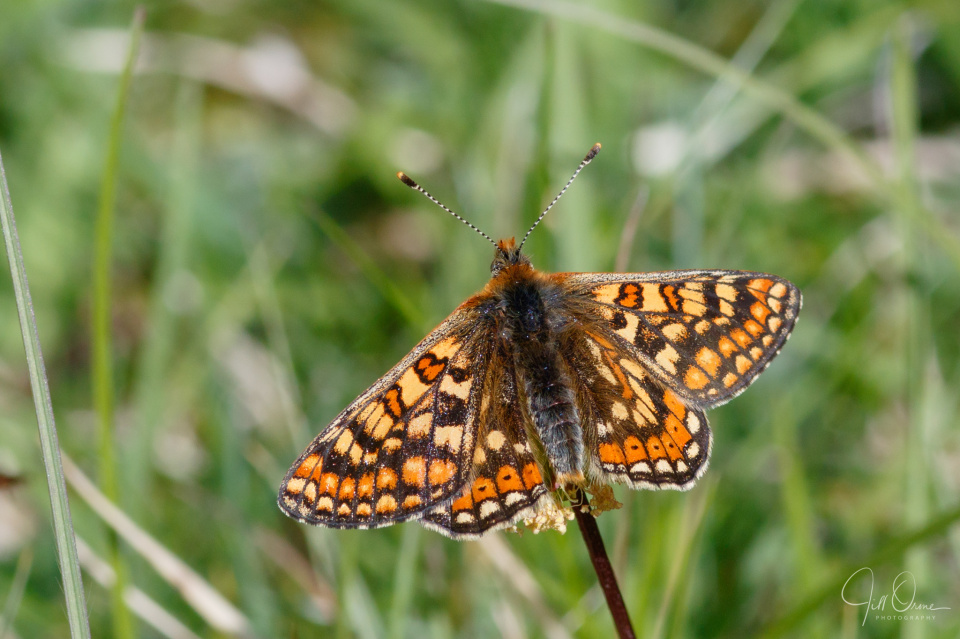 “Have you seen any Marsh Frits?”

“Yes, two. Up there, on the ridge, feeding on buttercups on the far side of the path.”

My panic was, as it turned out, completely unfounded: half an hour later I was virtually knee-deep in Marsh Fritillaries, a species I’d never set eyes on before. When hunting inverts many eyes make light work, and over the course of the morning I exchanged information and shared butterflies with several other Fritillary Fanciers who, like me, had made the trip to the Bill Smyllie Reserve at Prestbury Hill this morning, after hearing via social media last night that there were Marsh Frits out and about. It was all very civilised and clubbable, and I had a thoroughly enjoyable morning.

Yesterday’s informant also logged an Adonis Blue, but up till lunch time, when I left the reserve, no-one I spoke to had replicated that sighting today. But as well as the Marsh Fritillary I added Small Heath, Common Blue, and Five-spot Burnet to my year list, and I always work on the principle that it’s good to keep some ticks in reserve: if you found absolutely everything you were looking for in a single trip, what would get you up and out of the house for the rest of the season?

The Marsh Fritillary is one of the most threatened butterflies in Europe. Here in the UK it’s now confined to Northern Ireland, the west coast of Scotland, west Wales, and south-west and central southern England. As its name suggests it favours damp grassland, but it also colonises chalk and coastal grasslands, provided that they receive full sun, and support one of the three types of scabious which it uses as its larval foodplant. There is only one generation per year; eggs are laid in large clusters, and the caterpillars live in a colony, under a web which they spin over the scabious plant. They go into group hibernation at the 4th instar stage, emerging in the spring to scatter and complete their moults. They pupate individually in late April and early May, with the adult butterflies emerging two weeks later. I was pointed to two very freshly emerged adults today, one of which was so new that it couldn’t yet fly; its wings dried and hardened as we watched it, until eventually it made a successful maiden flight and disappeared from view.