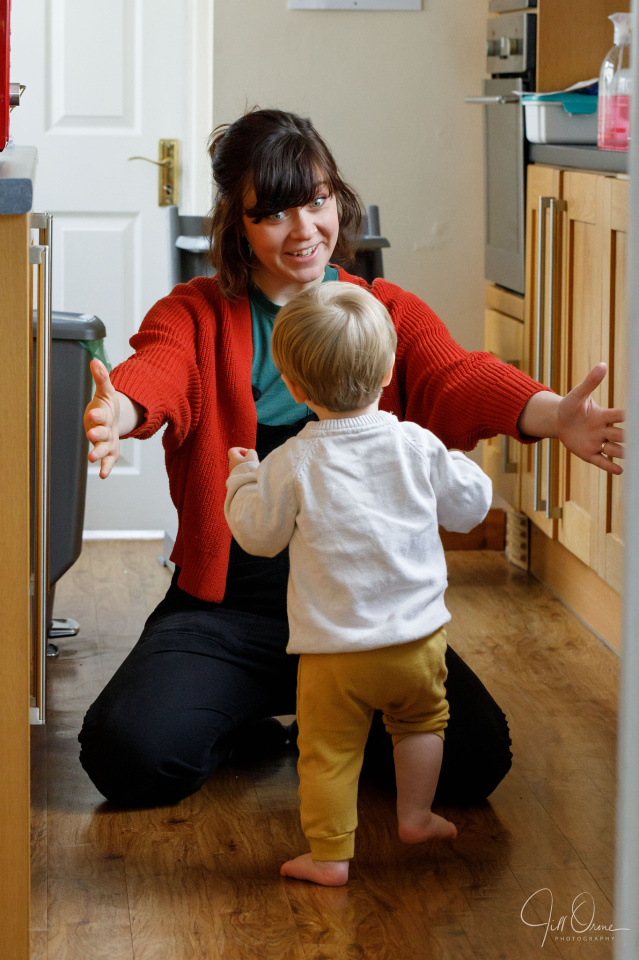 Several times today (notably when he was roaring at me this afternoon, for not peeling his orange fast enough) I wanted to say to B, “Who are you, little boy, and what have you done with my baby grandson?” He’s a determined little body, and now that he’s fully mobile he’s starting to really relish his autonomy. This being so, you never know whether he’ll accept an offered hug or not, but when he does – as here – it’s a special thing, because he’s excellent at cuddles, often delivering little reassuring pats on the back or shoulder to the lucky recipient (along with smears of snot and peanut butter).

As you’ll have gathered already, R and I had an excellent day over in the Principality, and I’m happy to assert that B enjoyed it too. We took him a little toy lion that we bought on the way out of the Cotswold Wildlife Park last week, and when he came in from his morning nap and found it sitting on the coffee table, he immediately pointed at it and said “Raar!” (Aside: how do babies do this so early?? When you think of the processing required to understand that a stylised 2-dimensional representation of a lion in a book, and a small cuddly toy, and a huge mammal behind wire mesh in a wildlife park, are all the same thing, it’s a phenomenal achievement.) At intervals during the rest of the day Lion was picked up and cuddled and patted, but afterwards he always had to go and sit back on the coffee table, which is apparently where he’s going to be living. Which will be fine, I’m sure, provided the Family B don’t decide to start having coffee mornings.

Other highlights of the day included an invert hunt in the garden, which B won effortlessly on account of having eyesight that’s six decades more effective than that of either of his grandparents, a trip to the park during which he declined to be lifted out of the swing until the movement had lulled him virtually asleep, and a lovely reading interlude in which he demanded to be told the names of everything in all the pictures. On the other hand, if I never have to sing “Row, row, row your boat” again, it won’t be a minute too soon – not least for the other adults in the vicinity – but when a small boy beams at you and makes an “again” noise, it’s really quite hard to say no.