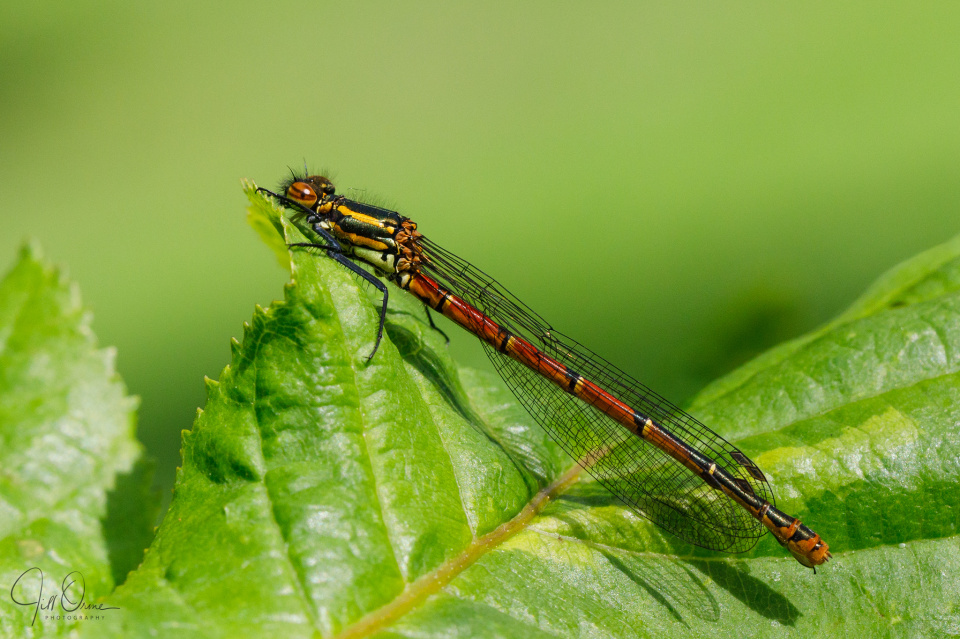 Happiness is standing chatting to your husband in the sunny garden, and then glancing past him and going, “Whoa! Wait – what?!!” because there’s a perfect Large Red Damselfly about a metre away, on a fresh leaf of the red chestnut tree, and you know that the light is fantastic, and there’s good background separation, and if she’ll just wait while you get side-on to her there’s a very nice image* there for the taking. And she sits calmly and lets you get the photo, and you thank her nicely, and then she leaves.

This is most probably the same female Large Red I blipped on Monday, but once I had her in the camera it was always odds-on that she’d feature again today. The only other serious contender was a fresh female Holly Blue, whom I caught ovipositing in the laurel tree in the top garden later in the afternoon. It’s always a treat to see this sight, and I wavered… but Odonata…. So then I asked R, and he instantly picked this photo, and that was all the encouragement I needed. The Holly Blue has therefore gone up on Facebook, if you’d care to see her.

* Eye of the beholder, and I says it as probably shouldn’t, etc., etc. But I saw it as potentially a very nice image before I took it, and having captured the shot I’m more than happy with it now.

As I was driving away from Croome the other day, I saw a bunch of chaps with cameras standing on the railway bridge, presumably waiting for a steam train to come through, and I was suddenly reminded of the late, lovely Malcolm Ranieri FRPS, who was a renowned train photographer. On one occasion he submitted a photo of a steam train to a club competition and had it savaged by the judge, who after criticising the perspective, composition, and colour palette, ended by saying, “Essentially what this is, is a nice holiday photo.” To which Malcolm’s response later was, “Well, he’s absolutely right. It is a nice photo, and I did take it on my holidays.” Would that we could all (me, I’m talking about, obviously) handle criticism so well.