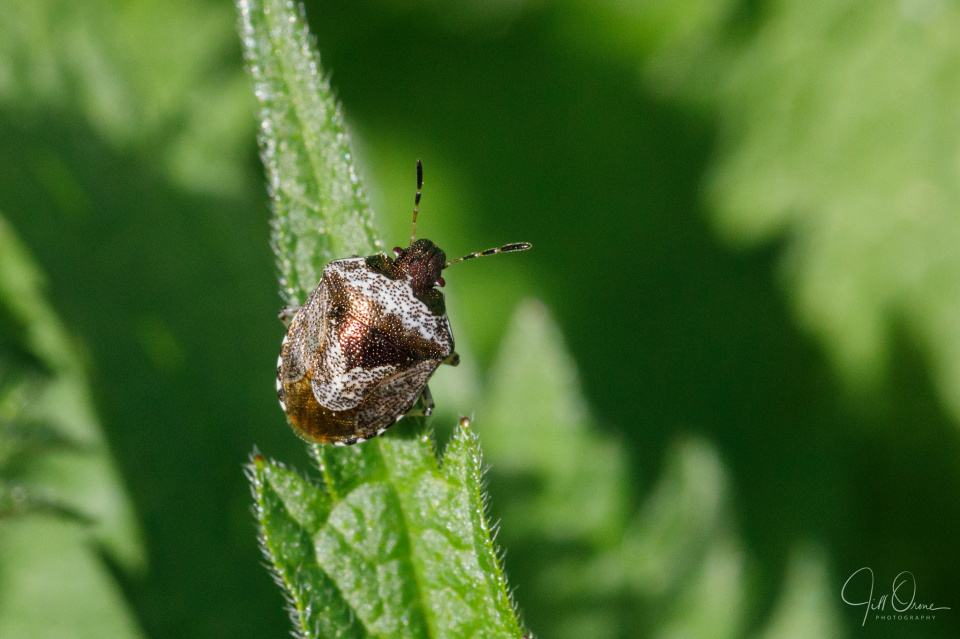 Some insect names are easier to remember than others, though for me almost all of them are easier to remember than the names of human beings. My heart sinks whenever someone hails me in the street, and not just because of the possibility that I’ll have to engage in conversation: the more immediate panic is that I might well not be able to summon up their name. On the other hand R – while quite used to having to solve quizzes such as, “I bumped into what’s-her-name this morning. Erm… you know – thingy’s wife. Dark hair. Their child played the saxophone. Became an accountant, I think. Or an optician. They’ve got a French bulldog,” is equally used to me producing the Latin names of invertebrates at the drop of a hat. Not that he’d know if I was making them up. Or care, probably. But I quite like calling things by their formal names, so when I can, I do.

The pretty little sap-sucking bug that’s familiarly called the woundwort shieldbug (because hedge woundwort is its favourite food through all its life stages) has gone through a few proper names now. In the C18th Fabricius called it Cimex melanocephalus, but it turned out that this name was already assigned to a Mirid bug, and insects are like actors: each name can only appear on the Equity register once. So in the early C20th it was renamed as Eysarcoris fabricii, and kept that name for over seventy years, until someone pointed out that at around the same time as Fabricius was misnaming it, the German entomologist Schrank had called this little creature Schönste Wanze, or “most beautiful bug” – so it then became Eysarcoris venustissimus.

(I hope you’re taking notes, by the way, because I’ll be setting a test on Wednesday.)

The bad news is that just when the woundwort shieldbug has got its head around all of this and settled down as Eysarcoris venustissimus, some smart alec has decided that the species needs to be reassigned to a different genus, and it’s henceforth to be known as Stagonomus venustissimus. These things take time to bed in though, and most web sites are still using the previous name.

The good news is that ‘venustissimus’ is distinctive, and works as a search term in its own right. And venustissimus is memorable for me, because when Child One first got into the concept of Christmas, aged two and just talking, she called Father Christmas ‘Harben Tissimus’. So I’ve come to think of this tiny thing as the beautiful Christmas shieldbug. I think she’d make a rather elegant tree decoration.