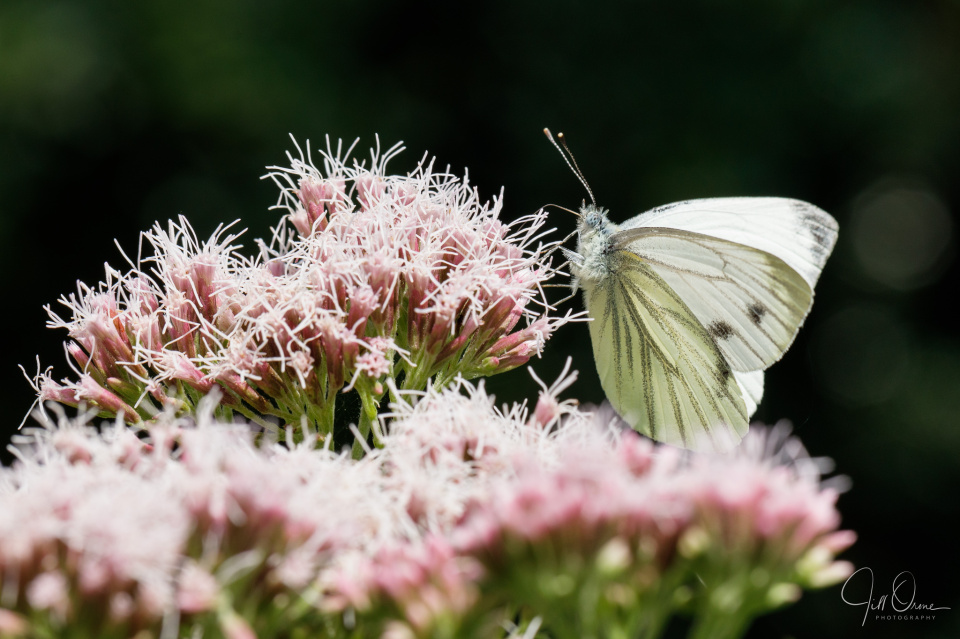 It’s only a few days since I last posted a Green-veined White, but I was pleased to capture this one on hemp agrimony at Forest Farm this morning (none of the Odonata that were present being prepared to stop and pose, during the few minutes available to me), and R has declared it to be his favourite of my non-B photos today.

The Boy Wonder has acquired several new words since we last saw him a week ago:

“Baw” is a round thing that you throw. (As opposed to all the other things you throw, some of them quite large and heavy, to the detriment of the furniture, and your grandmother’s ankles.)

“Bubbuw” is a bubble. Obviously.

“Teess” are the things you chew with.

“Tee” is the brown stuff your oldies drink out of mugs.

These words might or might not be produced when he’s asked for them – after all, he’s not a performing seal. But “no”, which up till last week was  a more or less vehement shake of the head, is now a word that comes out frequently and entirely voluntarily, and in two quite distinct flavours: “Nup,” and “Nooo”.

“Nup” is unemphatic, and is used for example when he’s walking around the room looking for something that he’s lost (or thrown) and can’t find: “Nup, nup, nup,” in a conversational tone of voice that reduces R almost to tears of laughter.

“Nooo” is much more emphasised, and is used for effect. For example, this morning he was playing with some shape sorters; he can solve these promptly and accurately, but today he decided to mix up the shapes and pretended to try putting them together wrongly. Each time he put a shape on the wrong base, he’d look at it in pretend surprise, then shake his head at me and say, “Nooo!”, and then dissolve into crowing laughter.

He has some little wooden jigsaws, with pieces that have to be fitted into shaped holes on base boards, and again, he can solve these pretty well by now. One of my best things today was watching him doing them with R, who would pick up a piece and ask, “Where does this one go?” To which B would reply “In’urr”, pointing the peremptory forefinger at the place where he wanted it to go, and sometimes tapping the board to emphasise the point. Mostly he played this game quite straight, but sometimes he’d do the same trick as he had with me – deliberately asking for the dumper truck to go in the fire engine space or whatever – and then shaking his head as if in surprise, and saying “Nooo!”

As you can probably tell, we were charmed. And if there were points in the day when he was… marginally less charming… these little hiccups were entirely wiped from the record by the smacking kisses he gave us as we were getting ready to leave. I can’t quite shake the feeling that we got such a rousing send-off because by this point he was glad to see the back of us, but that may just be my suspicious mind.