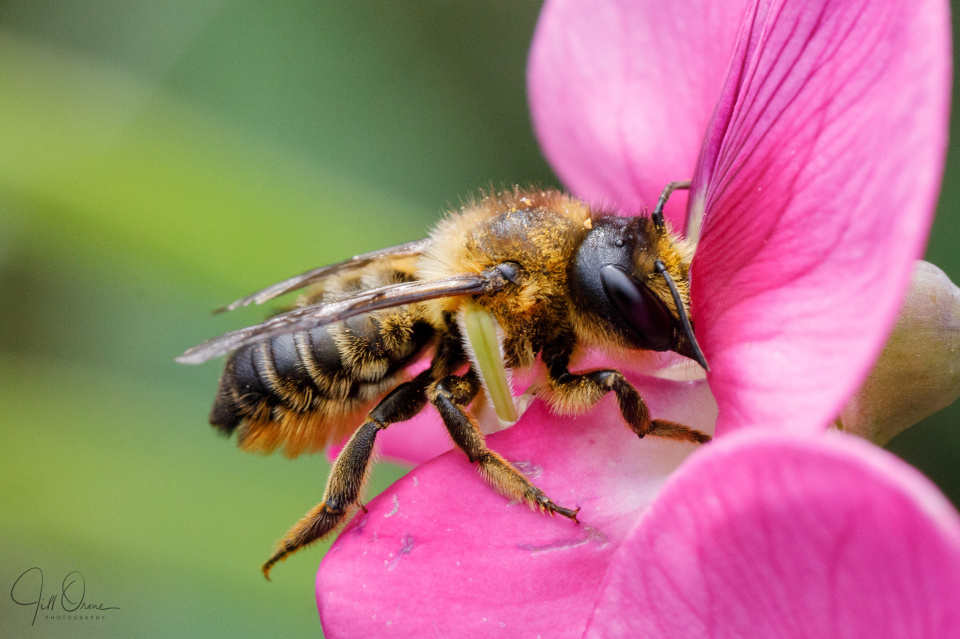 Well, you say that…

Polylectic in this sense means a bee that collects pollen from a range of unrelated types of flower. It’s said that Megachile willughbiella is happy to collect from daisies, campanulas and willowherbs, as well as from various kinds of pea – but I can’t say I’ve ever seen that in my garden. Out on the verges around the village I sometimes see them competing with Osmia leaiana for possession of a thistle, but in the garden they forage exclusively from this perennial pea. Which is useful for my purposes, because it means that I always know where to look for them, and even if the pea is unoccupied when I arrive at it, I never have to wait more than a couple of minutes for a bee to arrive.

This afternoon, when most of the garden was distressingly invert-free, a good number of female M. willughbiella were rootling around in the pea flowers. I didn’t see any males though, and they’ve been very much in evidence for the past couple of weeks, searching for unmated females, so I’m wondering if they may now have died off. In species accounts of some solitary bees you will read that the males die soon after mating, though it doesn’t seem to be the case with others, such as the hairy-footed flower bee. I haven’t been able to find out what the situation is in this species, but the sudden dearth of males is suggestive. I’ll be sad if they’ve gone already, because they’re stylish little bees and I enjoy watching them.

One point of interest in this photo is that the tibial spur on the bee’s hind leg has pierced the petal of the pea, and she seems to be using it as extra anchorage to hold herself steady, while she pushes her face towards the centre of the flower where the nectar is produced. Pea flowers have an unusual structure, and their odd shape makes them quite difficult for a bee to work: a few seconds earlier I’d watched this female lose her grip on another flower and slide right off it, despite some desperate scrabbling with her front claws. So using the spur like this – though it might be accidental – is probably quite helpful.

This is the first time I’ve ever noticed a tibial spur actually being used, and it prompted me to try to find out why insects have them. This turns out to be far too big a topic to be covered in a few sentences, but if you’re interested there’s a blog post here that at least skims the surface.