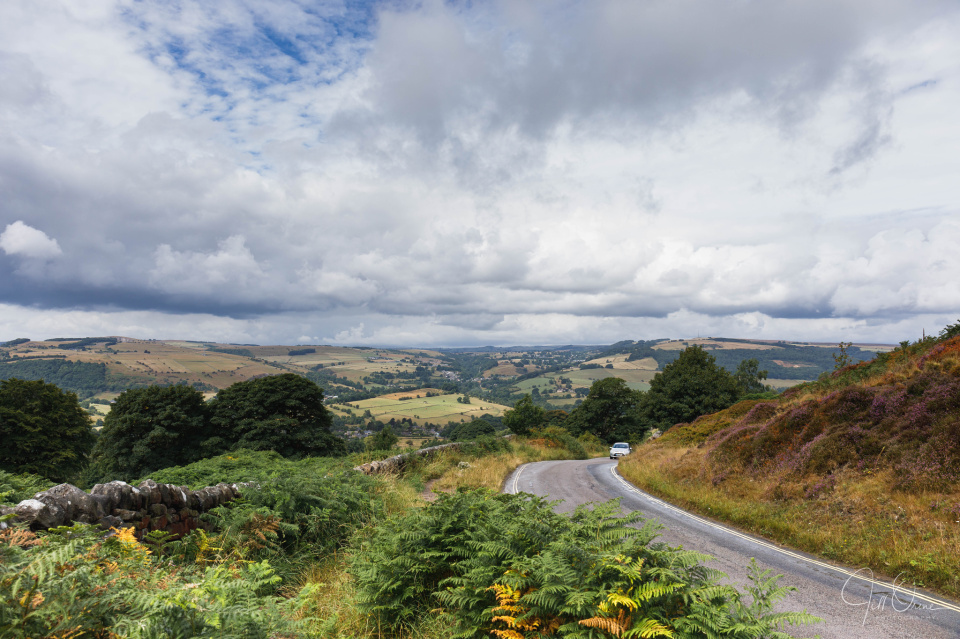 R and I went to Derbyshire today, to take R’s Aunt B for lunch, in belated celebration of her 90th birthday. We had a lovely time chatting with her, and as not infrequently happens I was left rather awestruck – partly because of the interesting things she’s done, and people she’s known, but also because I doubt that anyone who didn’t know her well would be able to guess the age she’s achieved. I can’t see myself managing this feat, but if I do I’ll be very grateful indeed if I’m as fit and active as she is now. I know for a fact that my lunch table stories won’t be half as entertaining.

I took this photo on the journey up, which had been unusually annoying due to some kind of incident in the vicinity of Chesterfield. This caused such long delays on the motorway that R’s satnav changed the route on us several times, and eventually decided to take us cross-country. At this point I abandoned my usual role on long car journeys, which is to read out bits of news and/or opinion from my Twitter feed to provide R with a counter-irritant to the tedium of driving, and gazed around at the scenery of an area I’ve loved since I was a teenager.

At some point I mentioned my need to take a photo, and said that I’d be grateful if R could stop somewhere picturesque, should the chance arise, but I had only a vague idea of where we were, so I was surprised when he said, “There’s a view coming up in a couple of minutes, I think,” and then, “Oh – that might have been the car park for it,” just as we sailed past a little parking area. We then crested a hill, and there it was: the Hope Valley spread out below us. I told him not to worry about turning, because I didn’t want to make us late, but he found a small lay-by part way down the hill and I was able to walk back up to this spot – glad that I’d eschewed going-out-for-lunch shoes this morning in favour of my smarter pair of walking boots.

On my way back to the car I had to step around a large rock at the entrance to the lay-by, and I realised that it had lettering carved on it. I mentioned this oddity to R, and he suggested taking a photo so we could try to decipher the inscription. I then discovered that a second rock right next to the car was also inscribed, and when we examined the photos it turned out that they both had Bible references carved on them:

HEBREWS 7.25
(Wherefore he is able also to save them to the uttermost that come unto God by him, seeing he ever liveth to make intercession for them.)

Though I’m an utter heathen, I’m quite intrigued by this find. R’s aunt, though she’s lived nearby for a number of years, wasn’t able to explain the rocks when we asked her about them, and I haven’t been able to find any references to them on line either. When I say ‘rocks’, I mean literally that: they’re boulders, rather than dressed stone monuments, and uneven in size, but they’re close together and clearly linked by both the style and subject of the inscriptions. The lettering is neat, but fairly worn by age and/or weather. If anyone knows anything about them, please do drop me a line.

EDIT: Overnight, an acquaintance sent me this link via Twitter, which explains the stones. Thanks, M!