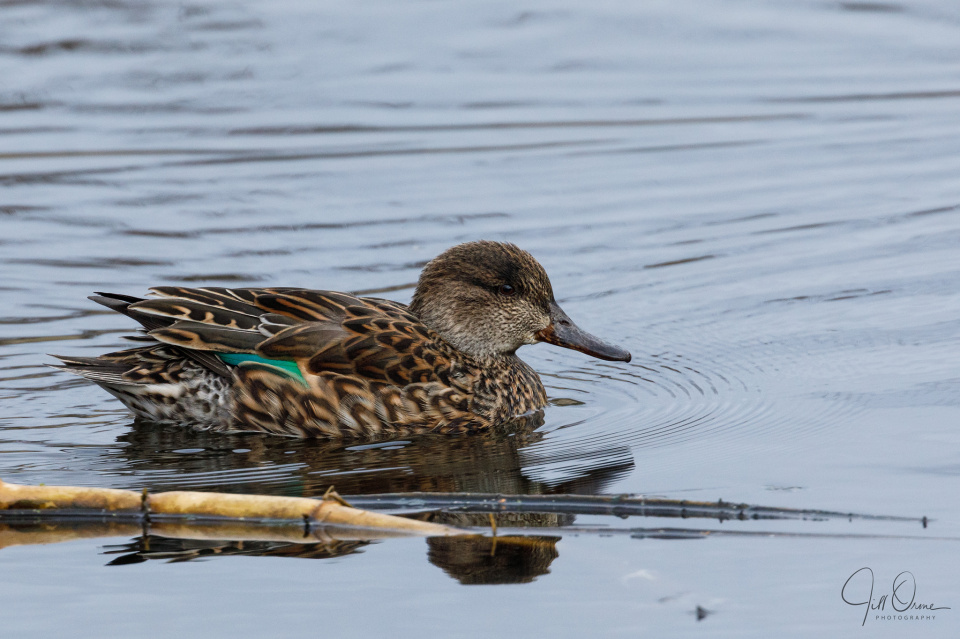 Actually, compared to the male of the species, she’s rather understated – much like myself – but I do love the little flash of green that a female teal wears on each wing. Quite a few ducks, and some other birds, have a brightly-coloured patch on their secondary wing feathers, which is especially noticeable in flight. It’s called a speculum, and probably helps birds to identify others of their own species – it can certainly be useful to humans trying to identify a fast-flying duck.

The teal is Britain’s smallest duck. Outside the breeding season they’re very gregarious birds and tend to be found hanging out in quite large groups, but there was just a single pair on the Henbrook pool at Upton Warren today, which suggests that they’ve already paired up in preparation for mating in the spring. Sadly they’re unlikely to produce their young at this site, because we only have a few thousand breeding pairs of teal in the UK, and they mainly nest in Scotland and the north of England. In the winter though, we have a huge influx from the Continent – it’s thought that as many as a third of the entire European population of teal may take their winter holidays here.

Fun teal fact: the colour is named after the duck, and not the other way round.

My second-favourite bird of the day was a male reed bunting who was in the process of putting on the dark face mask he’ll wear to impress the ladies during the breeding season. There were a few other nice things about (“Is that a curlew?” said a man coming into the main hide at the Flashes; CurLEEEW! replied the bird helpfully), but overall the site was pretty quiet. There’s supposedly a jack snipe around, but it wasn’t jumping up and down in order to draw attention to itself, and I didn’t manage to spot it.