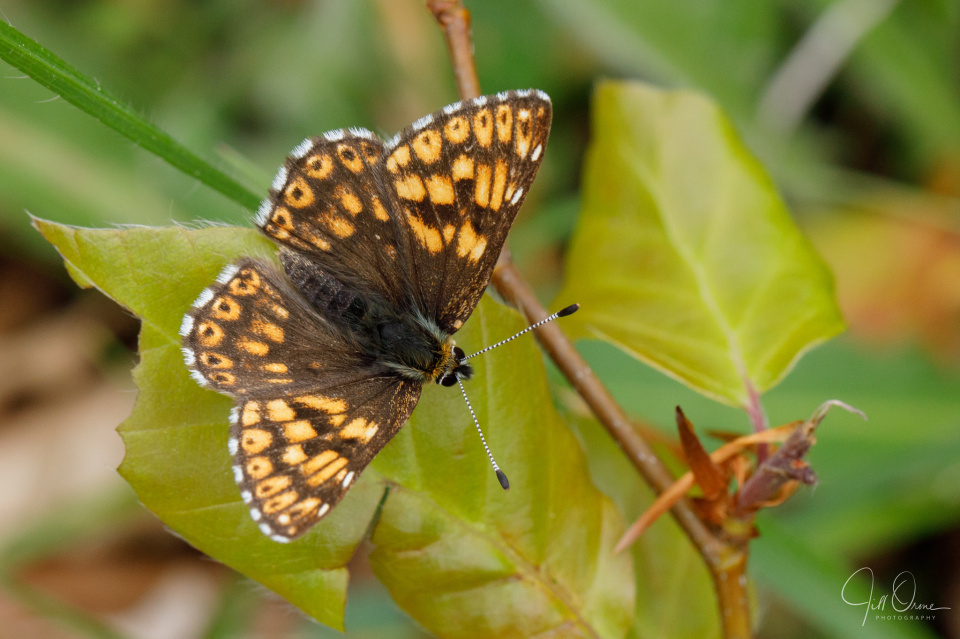 After my abortive trip to Prestbury Hill Butterfly Conservation reserve a couple of weeks ago, I was a little chary of making the climb up onto Cleeve Hill again, when it was overcast and windy down in the Vale. But it was warm, and the weather forecast hinted at some sunshine in the early afternoon, so in the end I went for it, and today luck was on my side.

I’d spotted three of my five target species within a couple of hundred metres of the gate, and was soon pointed towards the fourth by another photographer. In the end the only one I missed was the Small Heath, because although someone told me that they were out on the lower reserve in good numbers, by the time I’d scrambled up and down the upper reserve a couple of times, I’d run out of time and energy to go and look for them.

This is a Duke of Burgundy, and based on the amount of orange in her wing markings I believe that it’s a female. As well as brighter markings female Dukes have slightly rounder wings than males, and I’m indebted to the ever-excellent UK Butterflies for the extra fun fact that females have six working legs while males have only four. Their wing span is about 3cm, the females being very slightly larger than the males.

The Duke of Burgundy is a threatened species across Europe, and in the UK it’s now mainly found in central southern England, with smaller pockets in the Lake District and Yorkshire. It was once known as a woodland species, but the primroses and cowslips it needs as larval foodplants can’t survive in overgrown woodland, and most woods are no longer coppiced. This has wiped out many woodland colonies of the Duke, and it’s now mainly found on scrubby calcareous grassland such as Prestbury Hill.

I’ve posted some other photos from my happy afternoon with the butterflies (and moths) of Gloucestershire to Facebook, if you’d like to see more.