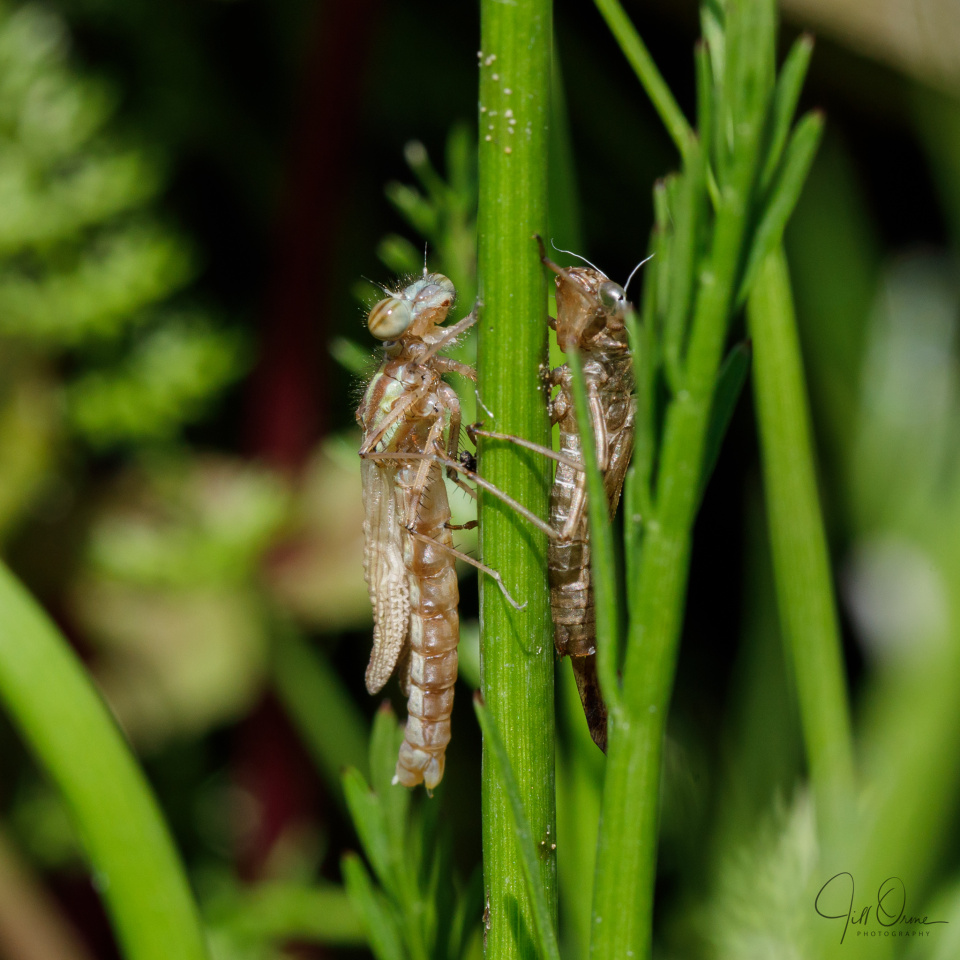 Had I managed to update the images on the front page of my web site today without a two-hour battle with WordPress (which is, as you may know, the invention of the devil), I’d have been out in the garden much earlier than I was, and I’d probably have caught the entire emergence of this Large Red Damselfly. As it was, she was completely eclosed by the time I first saw her, and was going through the fairly lengthy process of pumping haemolymph around her body and wings to expand them to their full size.

Sadly, something went wrong at some point, and one of her wings ended up deformed. This is something that occurs very easily – the slightest touch against a leaf or another stem, or even a drop of water hitting an unhardened wing can damage it beyond recovery – but in this case all of them looked fine right up to the point at which they were fully expanded and began to harden, when the right forewing twisted and shrivelled.

One damaged wing isn’t necessarily fatal to a damselfly, though obviously it makes it slower and less manoeuvrable, and therefore reduces its life chances. But the maiden flight is always a critical moment, and in this case she failed to clear the edge of the pond, and landed upright on another plant in a way that bent her abdomen quite badly out of true. At this point she was in a fairly sorry state, but I cut out the shoot on which she’d landed and turned it through ninety degrees so that she was horizontal rather than vertical, allowing her to shift her position and begin to straighten her abdomen. R than helped me to clip the shoot to a head-high twig of the nearby hawthorn tree, which is probably where she’d have been heading anyway, after which we went off and left her to her own devices. An hour later the clip and shoot were still there, but the damselfly had gone.

Every year a proportion of Odonata emergences end in failure for one reason or another, and worrying about the fate of a single insect is the fast track to madness, so I endeavour not to do it. These tiny dramas are gripping though, and I’d be lying if I said I’d stopped wondering how her story proceeded. But even if she survives she’ll most probably move to another water body over the next couple of weeks, so it’s highly unlikely I’ll ever see her again, and therefore it’s time for me to say that I did what I could and gave her a chance, and now it’s time to mentally let her go.