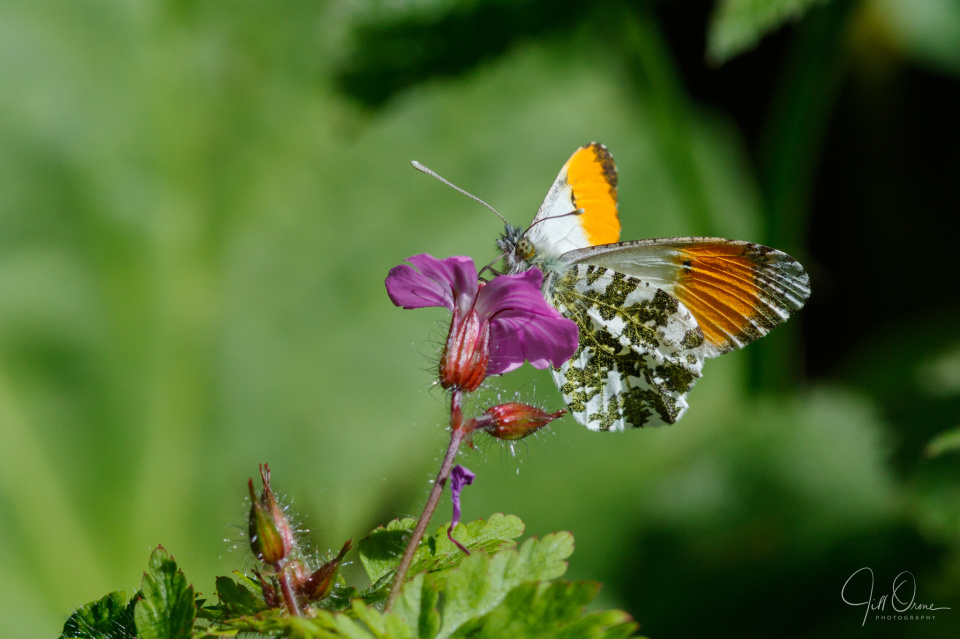 It’s been quite a poor year for Orange Tips in our village – a situation I doubt will improve next year, because some tidy-minded person recently strimmed all the garlic mustard from the verge across the lane – and I’d pretty much given up hope of getting a photo of one. So it was very lucky indeed that I happened to be standing in the secret garden with a 300mm lens in my hand, when this fresh male breezed through and paused for just a few seconds to snack on herb Robert nectar.

I have to say that I’m not convinced by the colour palette here – I’m sure some people love the combination of green, pink and orange, but for me it falls into the category of there being nowhere the eye can rest comfortably. Despite that though, and the fact that I made some other nice garden finds over the course of the morning, including the first Chrysotoxum cautum of the year, I was so triumphant at getting this unexpected opportunity (and then nailing the shot) that I did a little Crash Bandicoot dance, and none of my other inverts was ever likely to oust the Orange Tip from pole position.

R and I have always been rather unforgiving towards herb Robert – R hates the smell, which has something of the public urinal about it, and I dislike the fact that if you give it an inch you’ll suddenly find it’s launched a bid for world domination. But I noticed this morning that almost every butterfly that came through the garden stopped to feed from it, so I’ve rewritten the household policy, and when I was gardening this afternoon (eeeurgh) I left it alone to carry on doing its thing for the local nectar feeders.

Talking of gardening reminds me to recommend to you a technique I recently saw mentioned on a nature reserve blog, and which I tried for the first time today: if your borders are troubled, as our are, by self-sown tree seedlings, the quickest and easiest way to uproot them is to pull them out of the ground with pliers. Our soil is currently very dry, which being clay means that it’s like concrete, but this little trick worked so well that I was almost disappointed when I ran out of tiny saplings to attack.