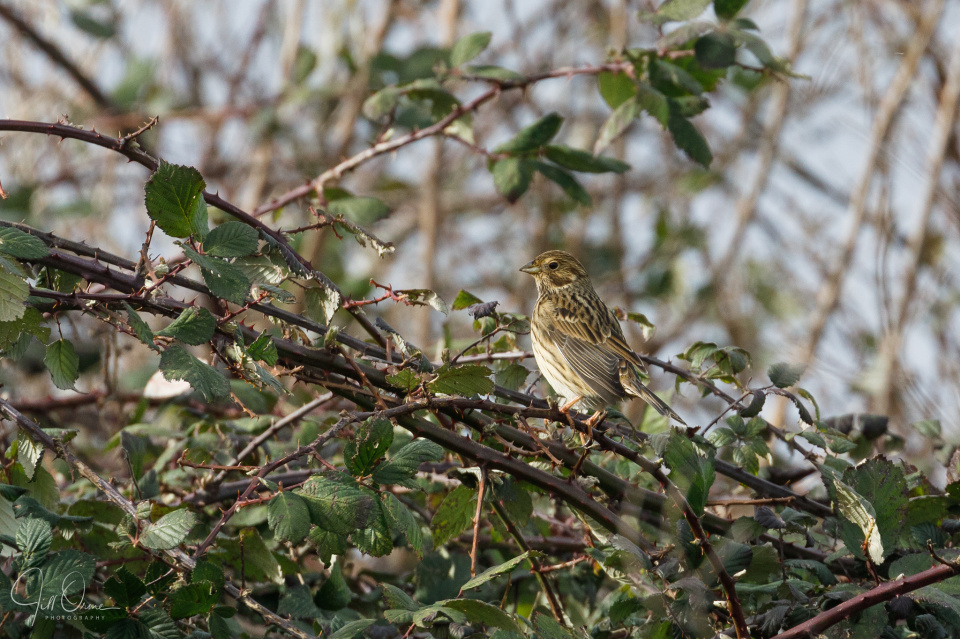 The corn bunting is a red-listed bird in the UK, meaning that it’s regarded as severely endangered, because its population has declined by 90% over the past half century. This is almost entirely due to changes in farming practice, with intensive cultivation depriving it of the weed seeds and insects on which it feeds, and earlier harvesting of crops disrupting its breeding cycle. Sympathetic land management such as is being practised by the Vale Landscape Heritage Trust can help by providing feeding and breeding reserves, but ultimately its survival is likely to depend on the wider restoration of suitable habitat such as broad field margins, and a decrease in the use of pesticides and artificial fertilisers.

There are said by the RSPB to be around 11,000 corn bunting breeding territories in the UK – which is easier to assess than the more usual measure of breeding pairs because males are at least potentially polygynous, mating with as many females as will nest in their territories. The fact that the females are almost solely responsible for nest-building and chick-rearing doubtless helps them to achieve this, but it means that males which are unable to find suitable territories remain unmated.

The nests are loose cups of grass set on the ground or in low vegetation, often at the margins of fields.Broods of four or five eggs are incubated by the female for around twelve days. The chicks leave the nest at between ten and fourteen days old, at which point they may still not be able to fly, and are therefore extremely vulnerable. Both parents will continue to feed them for a while, but will breed again if weather and habitat allow, producing up to three broods in a favourable year.