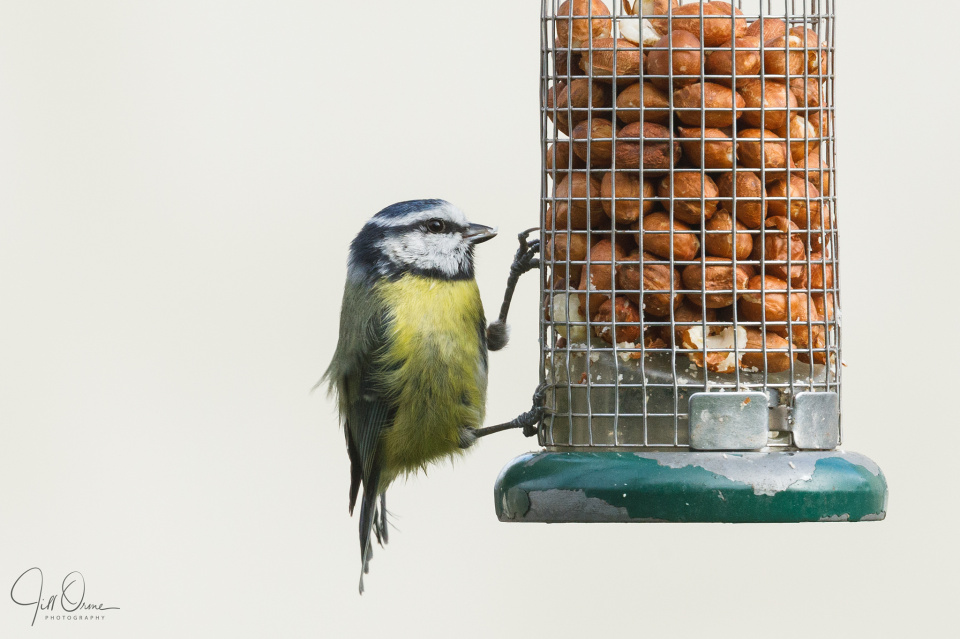 After doing a couple of bits of cutting back in the garden this morning, I fetched the camera and sat on a garden chair in a (reasonably) sheltered corner, waiting to see if the birds would accept my presence and come down to feed. They weren’t especially happy about it, but over time they did start to get used to me and chance fleeting visits. The smaller guys were more inclined to risk it than the bigger ones, which might seem surprising until you remember that they have a less favourable surface area to mass ratio, and therefore lose more heat. In fact my presence helped them by keeping away the ravening corvids (which made regular patrols over the garden to see if it was safe, but wouldn’t land so long as I was there), but I could hardly expect them to do reasoning as complicated as that.

This blue tit was one of the bravest of the little birds, possibly because it was one of the hungriest. It was a scrawny little thing, quite poorly feathered, and may have been struggling to assert itself against bigger and stronger members of the flock. I saw some highly uncollegial behaviour today between rival pairs of great tits and dunnocks, which would literally barge each other off the food (sometimes hard enough for feathers to be shed), even when there was plenty available for both of them, and if the blue tits behave in the same way I can’t see this scruffy little thing faring well in the fracas. He certainly fed well today though, and it pleases me to think that I may have facilitated that.