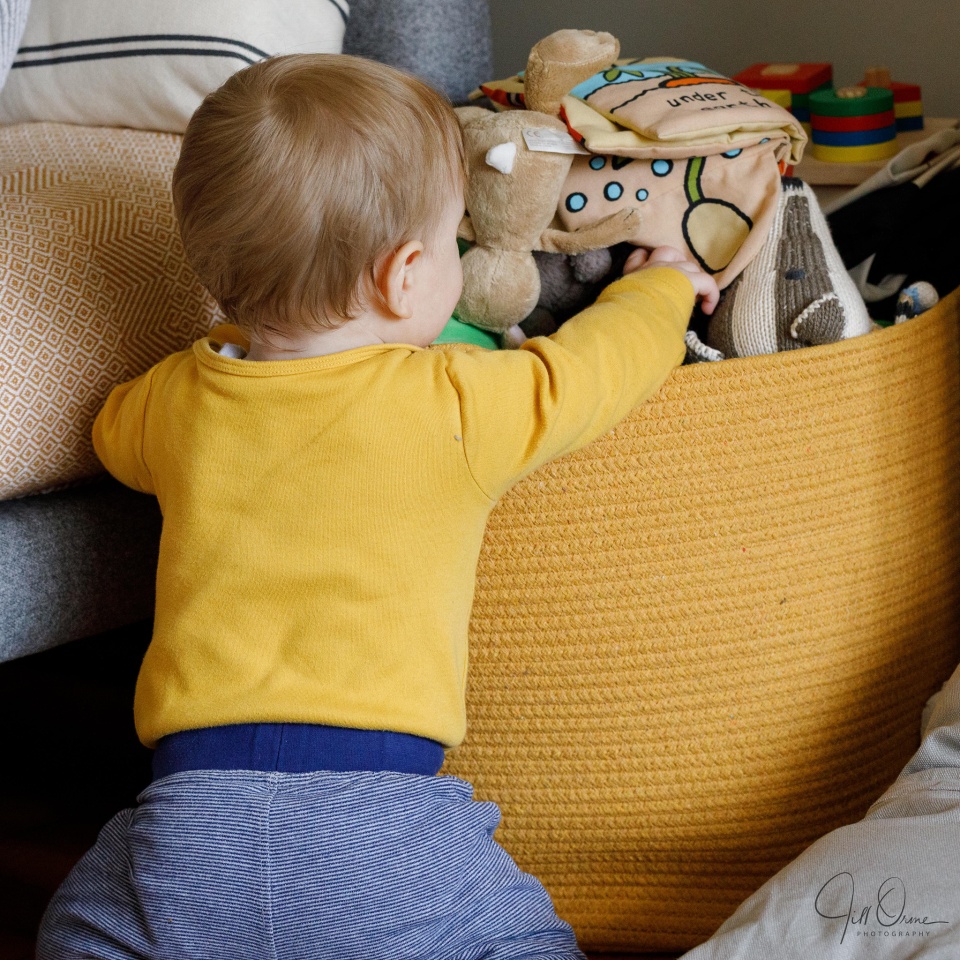 When a boy has mastered crawling, the world is his toy basket. And for his ancient grandparents, watching him crawl over to his toy basket and kneel up to choose something to play with provided a happy interlude, as they took a well-earned break from having to repeatedly stop him crawling under furniture and getting stuck, or fiddling with electric cables and sockets.

For the record, Rabbit and Dinosaur both came out, as did the cloth book, and Dr Gordon Perkins who was discovered underneath it. Rabbit received an especially exciting and vigorous workout – on the photos I took, with available light and therefore on a slow shutter speed, Baby B and Rabbit look like a demented windmill.

It was wonderful to see how delighted the Boy is about his new skill and the autonomy he’s gained from it. For his parents, of course, it’s a distinctly mixed blessing, as they now have to baby-proof every room he can access, and he needs one-to-one marking through every moment he’s awake and on the loose, but it’s a big step towards him becoming the child he’s been wanting to be for some while now, and he’s clearly loving it.

While we were playing with him today, he passed another – smaller – skill milestone: after crawling across the room to knock down a tower of bricks R had built for him, he sat down, beamed at us, and clapped his hands. This is something I’ve been trying to teach him to do for weeks, so I laughed and clapped my hands, and he clapped his again. By the next time I saw L he’d done it again a few times, so I asked her when he’d mastered it, but it turned out that although she’d been trying to teach him too, she’d never seen him actually manage to do it. By the end of the afternoon clapping seemed to have become a way for him to express his pleasure in his new grown-up self, and one of my abiding memories of the day will always be his little fat starfish hands carefully patting together.