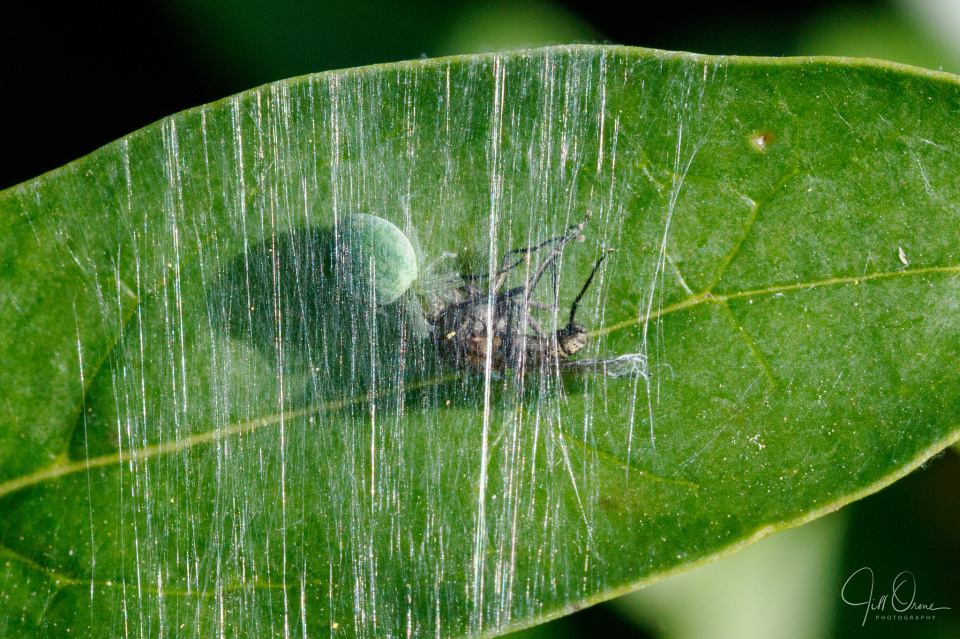 Today’s blip is something of an oddity – I wouldn’t normally post something that can only be seen as indistinctly as this. And I’m sure we’d all prefer to see the gory details of the predation that’s taking place behind this discrete veil. But I think the web is interesting in itself, and if I’m honest I’m a little smug that three frames was all it took for me to get the spider in focus, despite the light bouncing off the filaments and confusing both my eye and the camera’s autofocus.

The spider, which is all of about 5mm long, is called Nigma walckenaeri, and she’s one of more than 500 species in a family called the Dictynidae, or mesh-webbed spiders. Because this species is so small, and the females are so very green, they’re not all that easy to spot against the leaves where they lay in wait for their prey, but the web is very distinctive and as often as not that’s how I find them.

Nigma walckenaeri was originally a southern European species, but it was first recorded in London in the late C19th and very quickly became established in the Home Counties. There’s a theory that it may originally have arrived at Kew Gardens on an imported plant, but no-one really knows. During the late C20th it began to spread northwards into the Severn Valley and the Cotswolds, and it quickly became established in Worcestershire and Warwickshire. In recent years it has been found further north still, and it’s now regarded as a successful resident species.