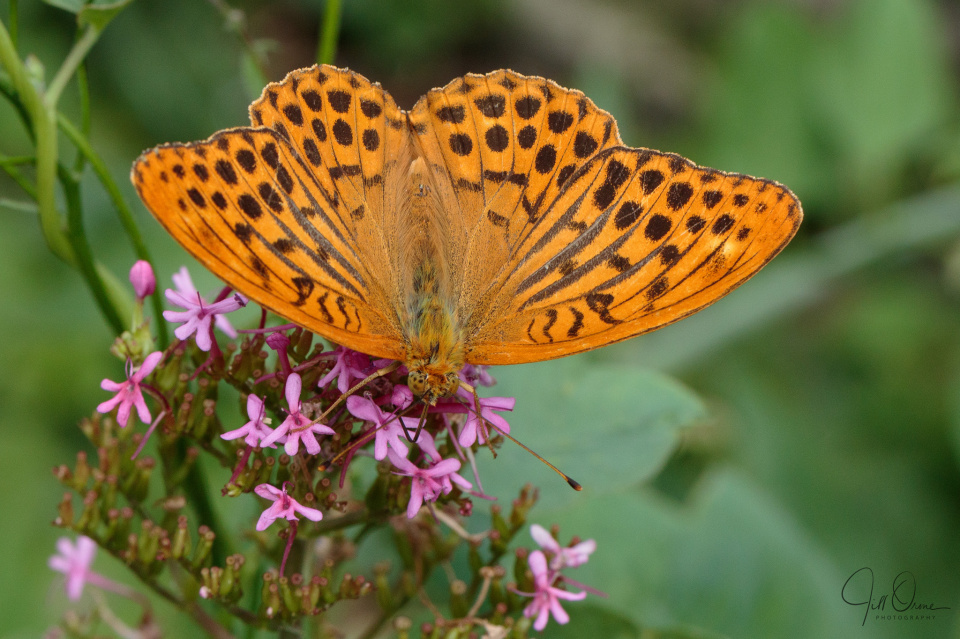 This isn’t – by some way – my favourite photo of the day, but it has to feature because it records a very unusual encounter. On a cold, dark, autumnal day, with a fierce wind gusting, I wasn’t expecting to see any butterflies at all in our garden – and certainly not a Silver-washed Fritillary, because this is a woodland species. Admittedly, we have a large garden, with quite a few mature trees, and so do our neighbours, but you still wouldn’t describe the area as heavily wooded. The nearest site I can think of where I know the Silver-washed Fritillary is abundant is Oversley Wood, near Alcester, which is about ten miles north of here.

When I posted this image earlier this evening in the West Midlands Butterfly Conservation group on Facebook, I stated that we’ve lived in this house for almost twenty years, and that this is the first time I’ve ever seen a SWF here – but actually I think it’s the second. Last Thursday, while I was sitting in the wild garden watching the world fly by, I thought I saw one – in fact it passed me several times – but it was flying high and fast, and I didn’t manage to get a photo. I half-convinced myself that it was a fresh Comma, simply because that’s a much likelier garden species, but I didn’t really think it could be, because it was so big, and such a strong orange colour. When this one turned up today, my first reaction was astonishment, but my second was a sense of vindication: I wasn’t hallucinating last week, and I do in fact recognise a Fritillary when one zooms over my head.

Lest we all get too excited about this special garden “tick”, I have to point out that this is a male – which you can tell from his colour, and from the four bars on each of his forewings – and unless he finds a female and they decide to settle down here together, there won’t be any Silver-washed Fritillaries emerging in my garden next year. But the County butterfly recorder thinks that this summer’s unusual weather has caused several species to disperse quite widely from their usual territories, so it’s not impossible that a female could find her way here too. If she does, she’ll look for places where dog violets grow abundantly, because those are her larval foodplant, and will lay her eggs in crevices in the bark of trees, a couple of feet above the ground. When the larvae hatch they will immediately spin webs for themselves and will overwinter in the bark crevices, emerging next spring and dropping onto the violets to feed. Each larva goes through four moults, over a period of a few weeks, before pupating, and the adult butterfly emerges between two and three weeks later.

We have a lot of dog violets in this garden. Just saying…..