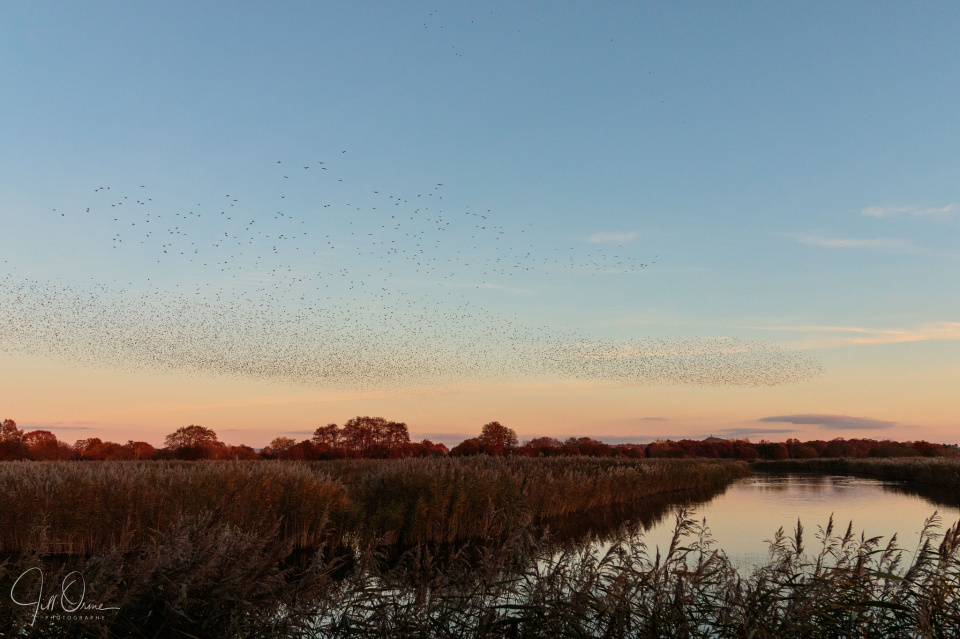 When I began to think about what to do for my 2000th blip, it didn’t take me long to come up with the idea of a starling murmuration. Deciding on a site took longer, because murmurations are surprisingly unreliable: you’d think that once a flock of starlings had found a good roost site they’d continue to use it, but today’s jam-packed reed bed can easily be empty tomorrow. Why a vast flock will suddenly abandon a site and move somewhere else isn’t really known, but half the fun of trying to photograph wild creatures is the fact that they’re unpredictable. Luckily we now have technology to help us with things like this, and armed with information from the Murmurations Roost Map and the Ham Wall starling hotline I was reasonably confident that a trip to Somerset today would bear fruit.

It’s a very particular thing to be waiting for a starling murmuration – I don’t know of any other birding experience that’s quite like it. Having decided earlier in the day where on the reserve I thought I might get some nice photos, I went back there at about 3.30pm, but then didn’t see a single starling for over half an hour. Luckily there were some marsh harriers hunting, which gave the half dozen of us who were in the hide something to take our minds off starlings, but as the minutes ticked by the tension began to mount, and I’d almost come to the conclusion that the birds had decided to move somewhere else, when a couple of dozen flew past and my hopes began to rise. Over the next few minutes a few other small groups whizzed past, and people were starting to make anxious muttering noises, when suddenly a huge group swooped in, and the murmuration started. Over the next forty minutes or so waves of starlings came in from all angles, and crazy numbers of photos were taken out of all sides of the hide, and then the last birds dropped into the reeds, and it was over.

I’ve chosen this as my main photo because I liked the softer light on the eastern side of the hide, and because I think it works as a landscape image too; if you have time to look at it full-screen, you should be able to make out Glastonbury Tor in the distance. There’s a more dramatic view into the sunset in the extras; by tomorrow I may wish I’d put them the other way round, but for tonight the more peaceful scene gets the nod. 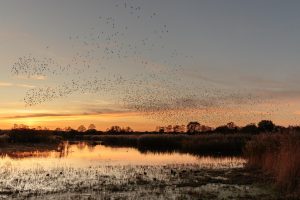 Before I go, as it’s my 2000th blip I’d just like to say thank you to the team who made the community buy-out happen and kept the site from disappearing, and who continue to run it now alongside all their other work and personal commitments. Those of us who can’t imagine life without blipfoto are hugely appreciative of all you do. I’d also like to say thank you to everyone who’s helped me with advice and information over the years, and to all of you who carry on looking at my blips and saying nice things, even though I’m the worst blipmate I know, and hardly ever find the time to do more than scroll through other people’s posts and sprinkle a few stars and hearts. Cheers, guys.