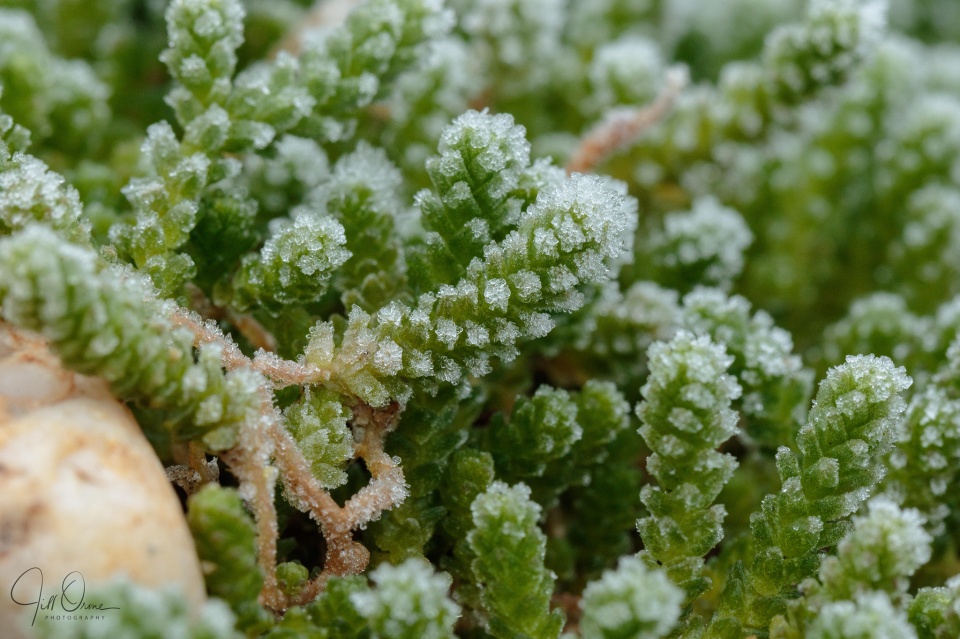 I wanted a lie-in today, after all of yesterday’s shenanigans, but it wasn’t to be because I had an appointment for a haircut in Stow-on-the-Wold this morning. When I hauled myself out of bed at grumpy o’clock there was a frost, and a bemused woodpigeon was trying and failing to drink from the frozen birdbath, so I knew that if I shaped myself and got out in the garden with the macro I would at least have the chance to photograph some ice crystals, and thus bag the day’s photo nice and early. This, I think, is a tiny alpine sedum, which grows (through no effort of mine) on top of our garden wall.

When I was driving back from Stow there were red kites in two places I’d never seen them before: the first was hovering above Trooper’s Lodge, where the Stow road joins the main A44, and the second drifted over the Roman road as I was approaching the Honeybourne industrial estate. While it’s exciting to have these beautiful raptors working their way towards us, I’m a little worried as to whether they’ll be able to co-exist with the resident buzzards, because the two species have much the same diet. There are several buzzards living around us, usually keeping a little way away from the village unless flying high over it, but R tells me that he saw one in a neighbour’s paddock a few days ago, which suggests to me that they’re already under some pressure to find enough food – unlike the smaller, faster raptors which are efficient hunters of live prey, buzzards and red kites eat mainly carrion, and in a harsh winter their existence is pretty marginal. Nothing ever seems to be as simple as I would like it to be!

Before I go I’d like to say a huge thank you for your generous reaction to my 2000th blip yesterday – I’m thrilled skinny that you liked the murmuration photos, and charmed by the lovely comments some of you left. I will try to get round to answering everyone individually, but for now please know that you made me feel all warm and fuzzy – and just a little pink around the ears. (:-)

Everywhere I’ve been today, there have been multiple fresh Speckled Wood butterflies flitting about. This...

Someone told me today that I was looking in the wrong place for dragonflies. I...

It seemed too long since I’d been at Slimbridge (seven months, according to my photo...

Another Thursday, another visit to Croome with R, and another Migrant Hawker. He’s not as...

R suggested to me this afternoon that it might be an idea if I stopped...

I had my hair cut today, for the first time in eight months. My lovely...