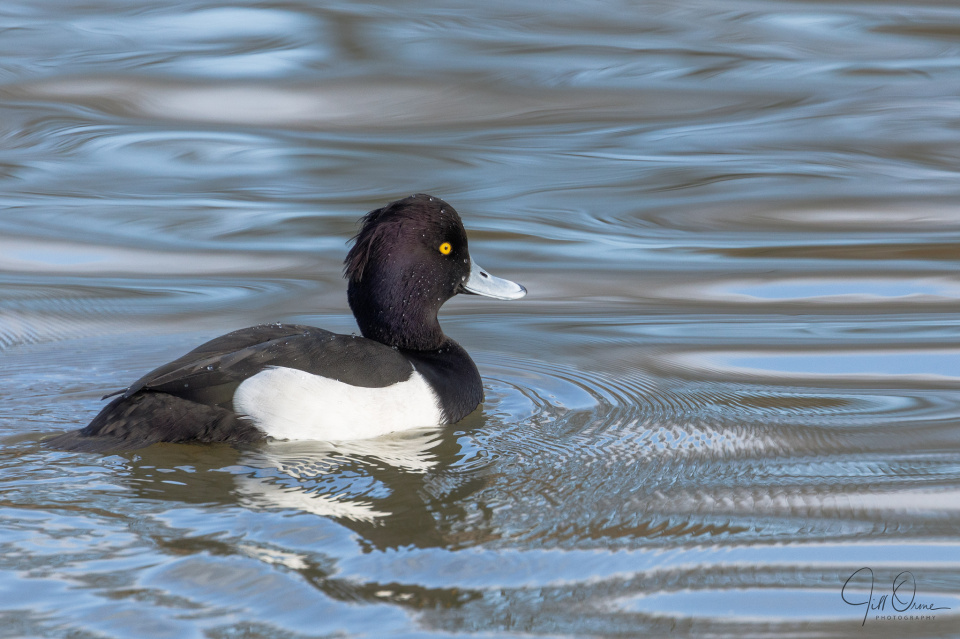 I have around a gazillion tufted duck shots from today, but I’ve gone with this one because I like both the duck and the water. The fantasy I’ve spun around the image is that the duck’s eyes are perfectly circular because the rather psychedelic patterns on the water were hypnotising him – though in reality of course they’re always that shape, and he couldn’t see what my lens was creating from the ripples and reflections on the surface of the river. He was actually watching some activity a little way downstream, and probably contemplating snails, because a few seconds later he dived in search of one.

Having had a very nice time out and about in Stratford with R at lunch time (we even managed to do some Christmas shopping without bitterness or recrimination), I felt that I really should do some kind of penance when we got home; so I donned protective gear and mined a festering heap of paperwork that has been gradually deepening on one corner of my desk for about the past eighteen months. I’ve told this story before, I’m sure, but I once worked with an editor who was so senior, and so good at her job, that she was able to get away with behaviour that in a lesser employee would have been regarded as Taking the Mick. One of her idiosyncrasies was to label the filing trays on her desk

– which always amused me, particularly as there was rarely anything other than outgoing, completed work in any of them. I always wanted to be this woman when I grew up, and I still think that if I’d ever achieved the growing up bit I might have managed it. She came to my mind again today because I found myself able to reduce about an inch depth of paper to just two sheets requiring action: everything else moved seamlessly from being either Too Difficult or Too Boring to being Too Late, and went straight into either the recycling bin or the shredder.

The good thing about being a skilled administrator is the sense of satisfaction you get from creating order out of chaos.