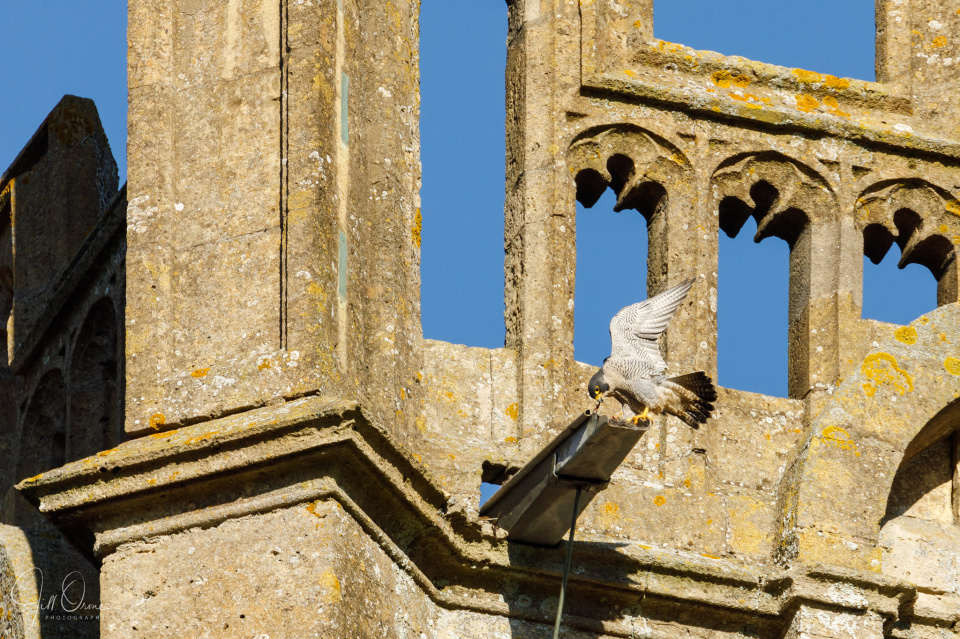 R and I were walking back to the car after shopping – or, as it turned out, window-shopping – in Chipping Campden this morning, and I looped round to take a few wide-angle shots of the church. I was just framing one when something took off from the tower, and I nearly fell over backwards in excitement when I realised that it was a peregrine. I’ve known since the spring that there are peregrines here – I’ve seen and heard them a few times, but never before when I had a long lens with me. I threw the strap of the small camera over one arm, dropped the body, grabbed the other camera, wound out the zoom, and madly started spinning dials to get to an appropriate shutter speed and exposure, while frantically trying to focus on the falcon. By the time I had it (her?) in focus, it had turned back to the church and was slowing as it came in to land – which was kind, because this allowed me one reasonably focused flight shot.

I’m not absolutely sure what the bird is eating here, because the prey was already on this water spout, but I had the sense that it was grey, so probably a wood pigeon. A slightly gorier image follows, if you don’t mind a bit of predation – but in any case this one would benefit from being viewed full-screen, if you have the time. The wings are flared here because the peregrine was clinging to the edge of the water spout and had started to lose its balance; after this is changed position so that it was standing more securely, but further back towards the stonework – so it became harder to photograph from down at ground level. 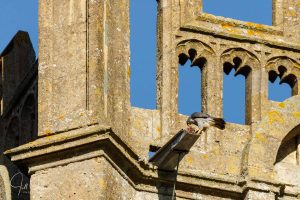 This afternoon I went to the funeral of the chairman of my camera club, who died suddenly a couple of weeks ago. As tends to happen when I’m only acquainted with someone through a small and specific point of contact of our lives, I was interested to hear the eulogy and find out more about him; he had a wide range of interests, was active across a number of community organisations, and was well-respected in all of them, as demonstrated by the number of people who came to pay their respects. A sad loss.