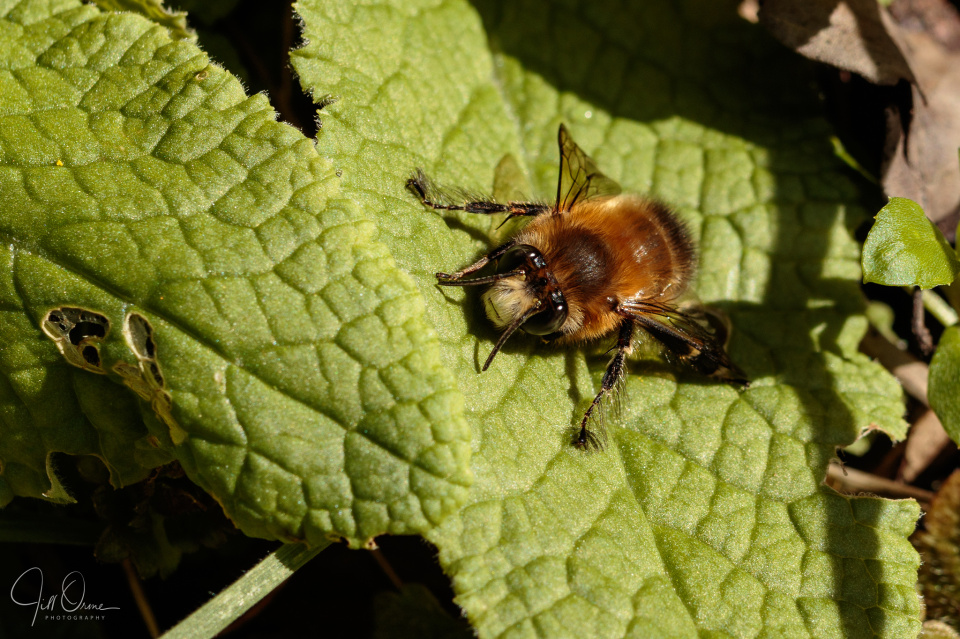 R and I went to Croome this morning, not having checked beyond the basics of the weather forecast. It was indeed sunny, but it was also pretty cold, due to the howling westerly wind blowing across the estate and apparently gusting to 50 miles per hour. The reception staff told us that much of the park was closed due to the risk of storm damage, but in fact only the shrubbery was cordoned off, so we were able to walk most of our usual circuit. Well, I say “walk”… much of the time we were either scuttling forward with the wind at our backs, staggering sideways under the pressure, or having to force ourselves directly into the wind like Marcel Marceau wannabes. And at the end of it all, we didn’t even have cake!

Back at home the garden looked inviting but was bitterly cold, and the few bees that were out were very sluggish. This one kept landing on sunny leaves, which isn’t usual behaviour for a plumpie, but taking flight when I approached, and as it was clear that he wasn’t happy and just wanted to rest in a warm place, I rattled off a handful of shots and then left him to it. The poor thing isn’t likely to survive the next couple of days, unless he’s found somewhere very sheltered to spend his nights: we’ve had snow flurries this afternoon, and with a clear sky tonight the temperature is plummeting.

I spent part of the afternoon scouring the web for an appropriate garment to wear to Child One’s wedding, and wondering who buys all the horrible dresses currently deemed fashionable. Not me, that’s for sure.