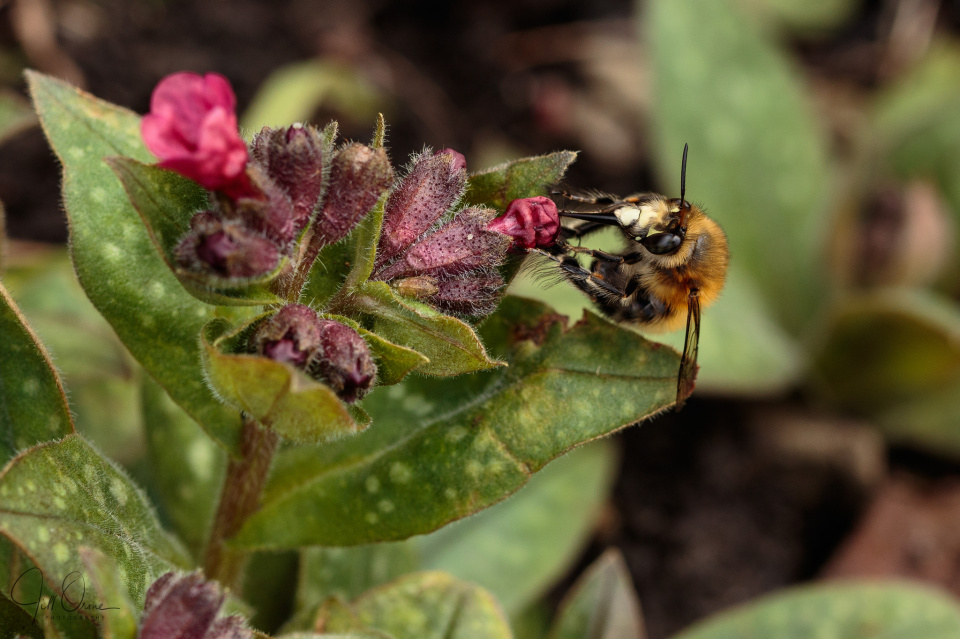 Yes, it’s the same pulmonaria patch – and possibly even the same bee. But just look at his gorgeous furry feet, and his extraordinary face furniture! And marvel at the fact that he could swoop in on this plant at high speed, check several open flowers and find them wanting in nectar, scent this only partly opened bud, and accurately insert his proboscis through a small opening in the petals, while still on the wing – it was only then that he landed, and began taking what appeared to be a very satisfying drink.

And when you’ve thought about that, do please consider the fact that this plumpie only emerged a few days ago, and that all of this behaviour is hard-wired into his tiny brain. Nature blows my mind sometimes, it really does.

If bees aren’t your thing (in which case, what is wrong with you??), I’ve given you a horticultural extra today which I hope might be of interest. It interested me because I’ve never noticed it before.

After trawling the garden for invertebrates (and finding a vestal cuckoo bee, which I certainly wasn’t expecting), I found myself doing gardening (eeeurgh). This hadn’t been my plan, but I suddenly felt compelled to try to rescue my oak-leaved hydrangea, which had become completely swamped by a self-sown patch of invasive, flowering grass. When I began the rescue mission I could barely see the hydrangea, so I had to work into the grass clump from its outer edges, cutting away the tough leaves with secateurs, until I’d separated the two and could dig out the grass without damaging what is still quite a small and fragile shrub.

I was then fussing around, infilling the crater I’d opened up by taking out the grass, and making sure that the hydrangea’s roots were all covered, when I spotted what seemed like fraying at the ends of several of its twigs. To the naked eye it looked as though something had caused them to split open, revealing the pulp inside, and it was only when I fetched the macro and looked really closely that I saw that this pale “substance” was actually newly emerging leaves. My photo shows three tiny, furry leaflets, currently no more than a quarter centimetre in length. 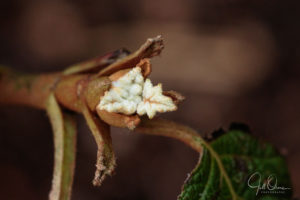 The joy of macro photography!