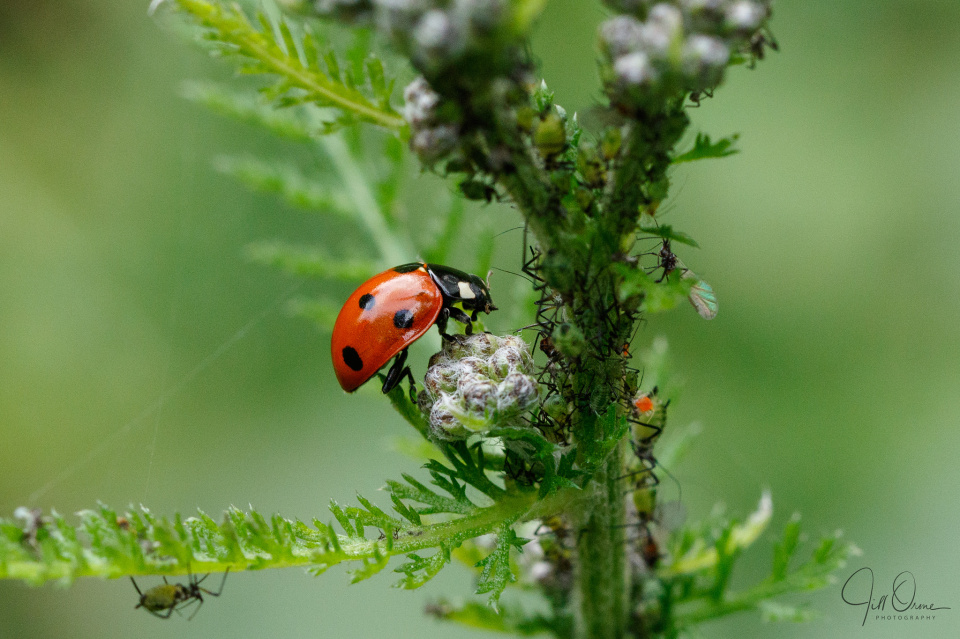 I’d been planning to go out in search of photos today, but in the event I spent several hours grovelling around in the flower beds, recording the tiny dramas I found going on there. I can’t abide human soap operas, but I think I’m becoming addicted to these.

This is not the same ladybird as I posted yesterday. By this morning that one had removed itself to an aphid-free leaf and turned its back on the seething yarrow stem, and was sitting looking huffy and pretending to have no interest whatsoever in eating anyone. This one was more active, picking off the odd small aphid that strayed too close, but it did seem to be paying the price I was told about by an expert yesterday: in some of my photos it was twisting its head around and rubbing its face with its forelegs, and appeared to be uncomfortable. A third one that I saw on a different stem was in an even worse state, scratching its face quite frantically, and with a big blob of some sticky substance hanging from one antenna. At the moment I have to say that the aphids appear to be winning this war through sheer weight of numbers, but if the ladybirds can get themselves into hibernation before the first really cold snap, they’ll have the last laugh come spring. 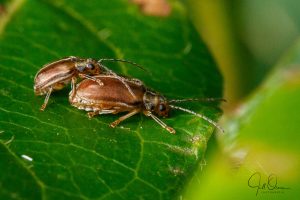 Tonight’s extra is a pair of viburnum beetles (Pyrrhalta viburni), in the dismount phase of a close encounter. If, like mine, the leaves of your viburnums look like doilies, these are the culprits: both the larvae and the adult beetles are voracious feeders on any kind of viburnum. Given a free choice they seem to prefer the softer-leaved varieties to the tough guys – I have Viburnum x bodnantense, Viburnum x burkwoodii and Viburnum x juddii, but their thick, fibrous leaves tend only to get nibbled, whereas my guelder rose (V. opulus) and Viburnum tinus are absolutely shredded. Luckily, as we all know by now, I’m a reluctant gardener, and prouder of my beetle population than I am of my shrub borders, so the worst danger these vandals faced from me today was having their photo taken.