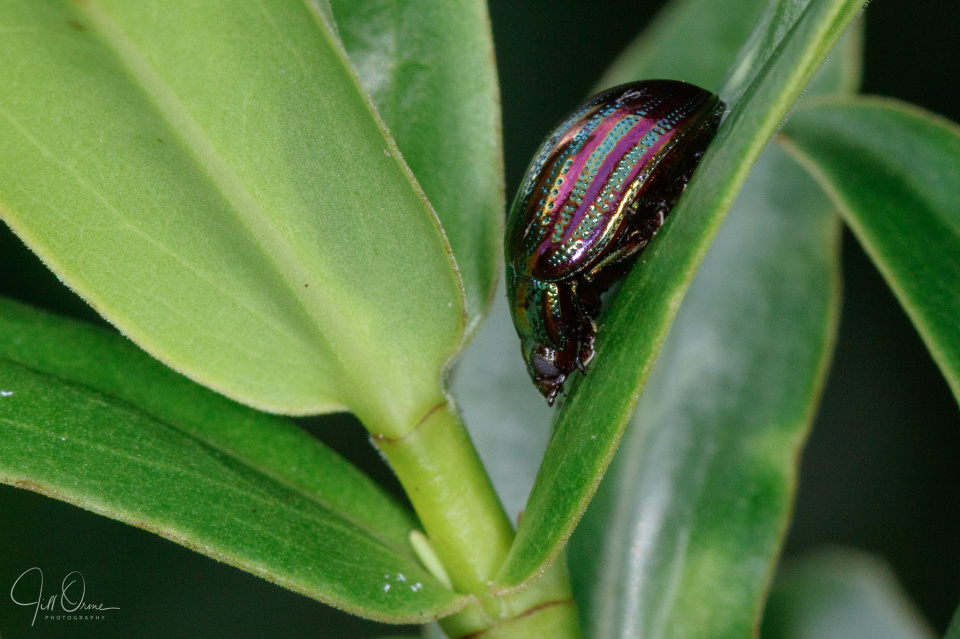 I haven’t seen a rosemary beetle since the old rosemary that used to grow against the yard wall gave up the ghost last year, so it was a surprise to discover one today, hunkered down among the new shoots of a hebe. It had situated itself very badly in terms of me getting a clear shot, which was rude of it: in order to take this I had to put the camera on a monopod, push the monopod down through the centre of the hebe, and lean right across most of the width of the shrub, using the camera and monopod for support – all the while expecting R to appear at my shoulder and point out that this was unseemly behaviour for someone who’d spent the past three days whining ceaselessly about the state of her back. Anyway, the camera, the beetle, the hebe, and my back all survived the mini photo shoot, and I got an image I quite like (despite the reflected flash), so I’m calling that a result.

Rosemary beetles are native to Southern Europe, and have only been found in the UK during the past half-century or so, but in that time they’ve spread quickly and become well established. The larvae and adults both feed on the leaves of aromatic, woody herbs – rosemary, obviously, but also lavender and thyme. (Hebe is not listed as one of their food plants.) According to UK Beetles, the rosemary beetle isn’t considered to be a pest, but that’s certainly not the impression you get when you type the name into a search engine: almost every site in the results list will be telling you what you can do to get rid of it. As I said yesterday though, I’d far rather have beetles than open-garden-worthy shrubs.

The life cycle of this beetle doesn’t seem ideally suited to our climate, and the fact that it’s doing so well here is probably due to climate change. Adults emerge in early summer and lay their eggs in the autumn, and the larvae feed and develop through the autumn and winter, pupating in the spring. In a mild year, and especially in towns and cities, some of this year’s adults may survive the winter and still be around when next year’s emerge, giving the impression of a sudden “plague” of beetles. Winters here though tend towards a persistent damp cold that’s a long way from Mediterranean, so I’d be very surprised if we ever suffer a surfeit of rosemary beetles.