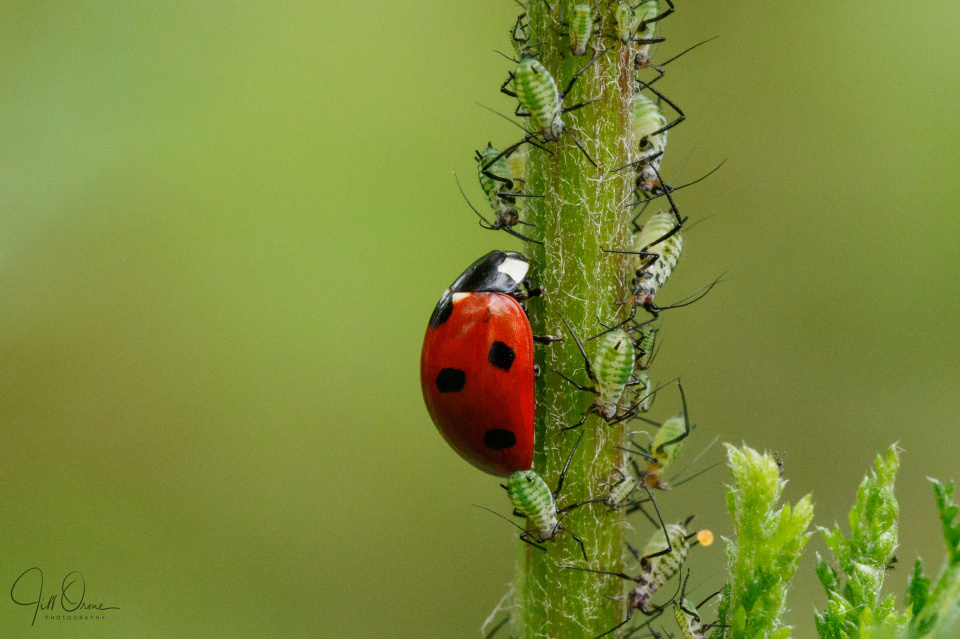 I can’t decide whether this reminds me more of a lion gazing at a herd of wildebeest, or the confrontation between the Fellowship of the Ring and the Balrog in the Mines of Moria.

If there’s one thing we’re all born knowing, it’s that ladybirds are voracious predators of aphids – in fact it’s said that a single ladybird may eat as many as five thousand aphids over its lifetime. But perhaps these aphids didn’t get the memo. They didn’t seem remotely frightened of the predator in their midst – on the contrary, they kept crowding in on the beetle in what appeared to be synchronised waves of movement (I tried to get a lower-ISO version of this photo by putting the camera on a tripod and dropping the shutter speed, but the aphids spoiled all my longer exposures by refusing to keep still).

Ants, which farm aphids for their honeydew, will sometimes turn on a ladybird that’s threatening their flock, and the ladybird either flies away or, if it can’t safely spread its wings because the ants are too close, simply folds in its legs, hunkers down under its tough shell, and waits until the ants get bored and leave. So I can’t seriously imagine that the ladybird was ever in any danger from this “attack”. But it didn’t make any move against the aphids either, sitting completely still on the yarrow stem for the entire afternoon, as its potential lunch marched back and forth past (and sometimes over) it. By the time I went to make dinner it was looking a little bedraggled, with fluff and pollen that hadn’t been there when I took this shot now sticking to its head and shell, and I’d begun to feel quite sorry for it.

To be honest though, even allowing for a natural instinct to sympathise with the prey over the predator, a group of aphids were never going to win my approval in a contest with a ladybird. Ladybirds have fairly discreditable habits, but they’re handsome and somehow… cuddly. Aphids, on the other hand, make me feel like scratching.

EDIT: After posting this photo in the UK Ladybirds group on Facebook, I received this comment from one of the admins: “Even when aphids don’t have a soldier caste they’re not fully on board with being eaten! They will try to fight back, most commonly by trying to daub wax over the predator in the hope of gumming up its mouthparts or just making it go away.”