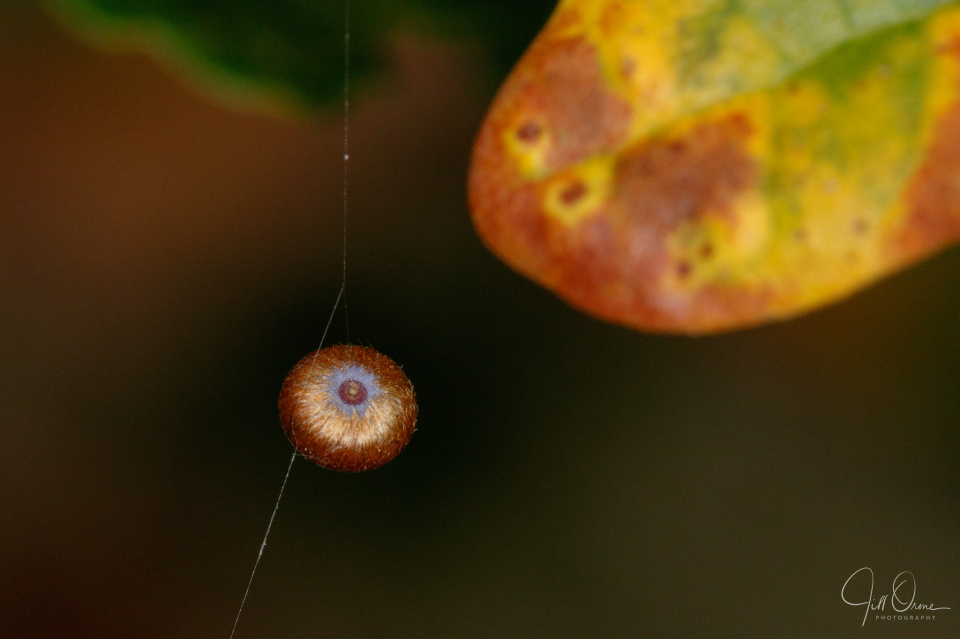 Honestly – the gall of it…

It was another fairly gloomy day, and not especially conducive to photography, but I was raging to get out of The Trench, and on discovering that Coughton Court was open (which it’s avoided being on most occasions recently when I’ve contemplated visiting it), I made a snap decision to zoom over to Alcester. The gardens were looking lovely, and still surprisingly colourful, but I was after grittier subjects – invertebrates and fungi – so I crossed the river and walked through Timms Wood and part of the Heart of England Forest to see what I could find. 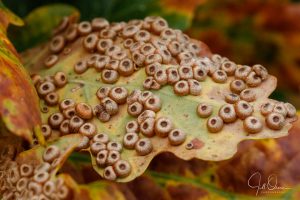 The silk button gall is produced by a tiny wasp called Neuroterus numismalis, which goes through two very different generations each year. The extra shows an oak leaf with dozens of silk button galls attached to it, and the main image shows a single one of these galls, now separated from the leaf but still attached by a couple of silken threads. Eventually the galls all fall to the ground, either separately or when their host leaves drop. Each gall contains a single female wasp larva, which will overwinter in its button home among the leaf litter on the ground around the tree.

In early spring the female wasps hatch. This is called the agamic generation because these females lay eggs which don’t need to be fertilised by a male. The unfertilised (parthenogenetic) eggs are laid in developing oak buds, and cause a different type of gall called a blister gall, which appears as a double-sided swelling within the substance of the leaf. Both male and female wasps emerge from the blister galls around mid summer, and their fertilised eggs produce the next generation of silk button galls. It seems a crazily complex life cycle, but looking at the number of silk button galls on the young oak trees in the Heart of England Forest today I have to conclude that it works for this little wasp!

There are some good photos here illustrating all stages of the cycle, if you’d like to know more.