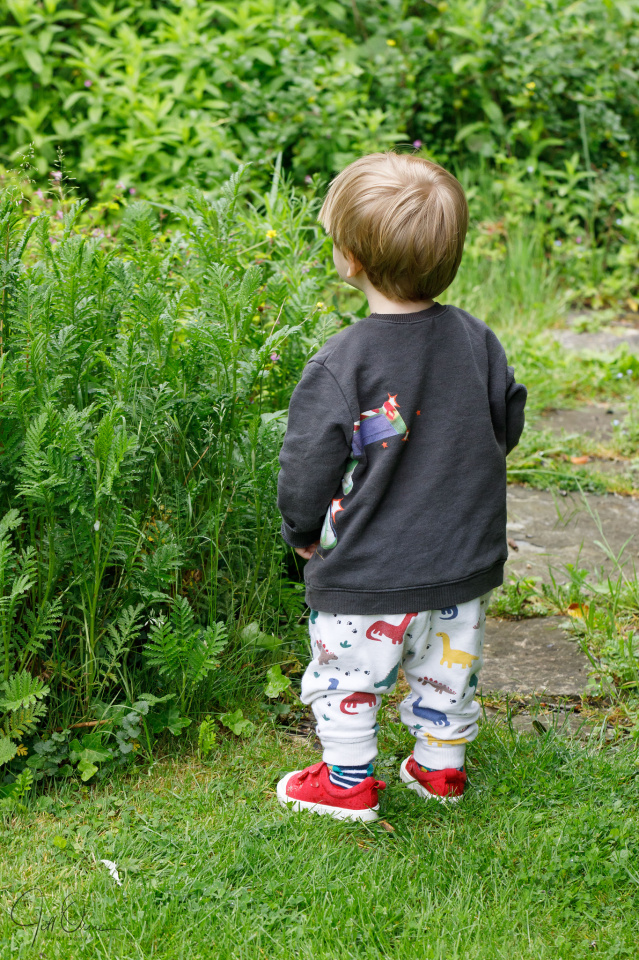 “Zzzzz,” said Baby B as we walked out into the garden, jiggling his hand up and down to indicate the flight of a bee.

“OK, ” I said, “we can look for a bee. But I don’t think we’re going to find one this morning. It’s really too cold for bees just now.”

“Urr,” said Baby B, peremptorily pointing a finger at a distant…. male Bombus pratorum, feeding on the herb Robert at the entrance to the secret garden.

At this juncture a small battle of wills took place between B, who wished to look for more insects in the secret garden, and R, who was concerned (rightly) that the grass was too long and too wet, and he’d end up soaked and needing a change of clothes.

“Inurr,” said B, employing the peremptory finger towards the secret garden.

“What can we see over here?” said R, setting off in the opposite direction. “Can you come and look with me?”

“Inurr,” said B, departing at a rapid trot into the secret garden.

Luckily I was able to distract him by suggesting a sit-down on the wooden garden bench – benches being, for some unknown reason, a particularly favoured thing at the moment. So I lifted him onto the bench, where he sat in state and smiled in a very satisfied way – right up until I suggested (with a photo in mind) that he might like Granddad to come and sit on the bench with him. At this point the peremptory finger came out again, and was reinforced with an extremely definite head shake. No, Granddad would not be getting to use B’s bench this morning. Granddad could stay right where he was. And just to make sure, he spread himself along the bench as far as he was able. B had spoken, and the bench, it transpired, was fully occupied.

If he’s still behaving like this when he’s seventeen, words may have to be had. But at seventeen months it’s charming, and his grandparents are duly charmed. He only went home nine hours ago, and we’re missing him already.