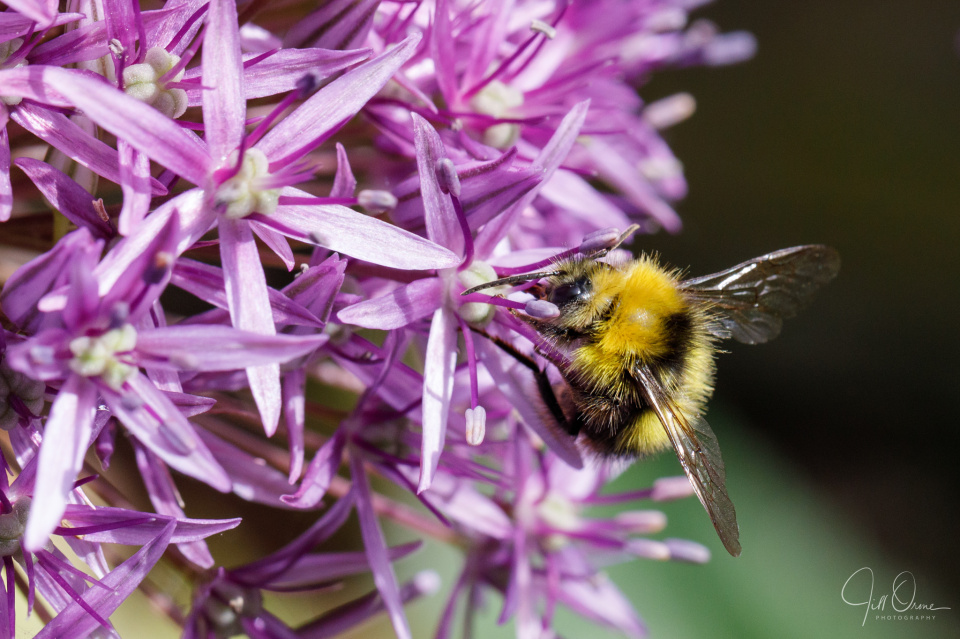 The alliums are out, and seem to be permanently covered with a little gang of first-brood Bombus pratorum males, feeding competitively. These little bumblebees are so fast, skittish, and erratic that I find them hard to photograph even on a bright morning, but it’s a shot I think is worth capturing so I keep on trying. This isn’t as descriptive of the bee as I’d like, but there’s something about his attitude that I hope conveys his urgency.

Every year I find myself surprised by things like this: there’s no particular reason why male Bombus pratorum should prefer allium nectar to, say, pyracantha or cotoneaster, but they clearly do, because while both of those shrubs are in full bloom at the moment, and feeding a plethora of bees and hoverflies, the B. pratorum boys are ignoring them and concentrating instead on the ornamental onions. Similarly, the hoverfly Merodon equestris likes geraniums, but of the three colours we have in the garden it hugely prefers the magenta variety to the blue and pink. Magenta geraniums grow fairly sparsely here, while we have entire ground cover mats of the blue ones, but M. equestris will circulate round the magenta flowers and bicker with anyone else trying to feed from them, rather than simply eating the more abundant nectar.

I guess there’s no reason why insects shouldn’t have taste preferences, and pass those on down the generations in their DNA, but given their short lifespan and the urgent need to reproduce that governs most of their behaviour, I do find it odd that some of them at least will show such a marked preference for a single food source.  It’s a small thing, but I notice it, and it puzzles me.