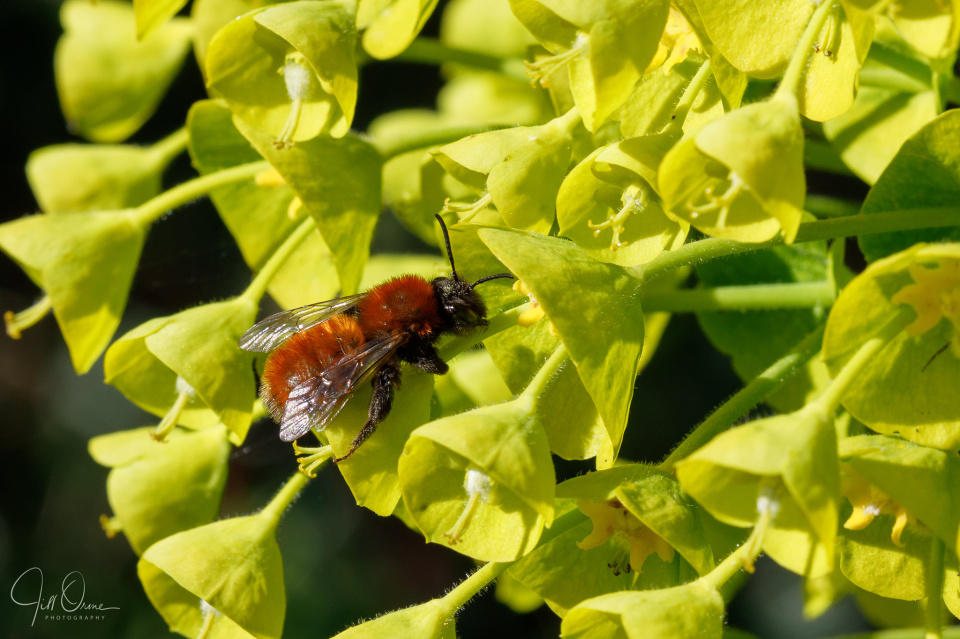 Today wasn’t the easiest day for photography, because there was a lot of scudding cloud which caused the light to change from minute to minute. Consequently I spent much of the morning rushing out of the house to take advantage of a bright spell, only to stomp back inside again when the sun disappeared, and the light and temperature both plummeted. I don’t handle this kind of situation well, and by lunch time I was seething with frustration. R made sympathetic noises and fed me biscuits, which calmed me down at least slightly.

By mid-afternoon I still didn’t feel that I’d shot anything I really liked, so I did a little happy dance when I spotted this fresh female Andrena fulva on the big euphorbia in the rose bed. Bees can be quite picky about the flowers they visit, but A. fulva is relatively catholic in her tastes, taking pollen and nectar from a range of fruit trees and bushes, as well as other spring-flowering trees such as sycamore, and wild flowers such as buttercups and garlic mustard. She’s also partial to euphorbia, which is relatively unusual – there are flies and hoverflies that like this plant, and common wasps and some of the nomad bees will visit it, but I don’t remember seeing any other Andrena feeding from its flowers. I’ve no idea how this native bee came to develop a taste for an introduced plant from the Mediterranean, but every spring I keep a special eye out for this particular photo opportunity, because I love the contrast between the rich red pile of a female Andrena fulva and the yellow-green bracts of the euphorbia.

This individual appears to be unmated, because she’s not yet gathering pollen. I haven’t actually seen a male Andrena fulva yet this year, but there must be at least one around, because a second, mated, female was frantically collecting pollen from the flower candles on the laurel hedge this afternoon. Males can mate multiple times, if they get the opportunity, but each female will mate only once, after which she’ll be fully focused on constructing and provisioning her nest or nests. These are usually excavated in flat soil with short vegetation, such as cropped grass, or even lawns or flower beds, and are often constructed in a kind of loose colony with the nests of other females. Each nest has a main shaft going down 20-30cm, with four or five lateral branches, each ending in a single brood cell, and a female can build two or three of these nests if conditions are favourable. After her eggs hatch, the larvae grow rapidly and then pupate; the new adults overwinter in their nest cells, and emerge the following spring.