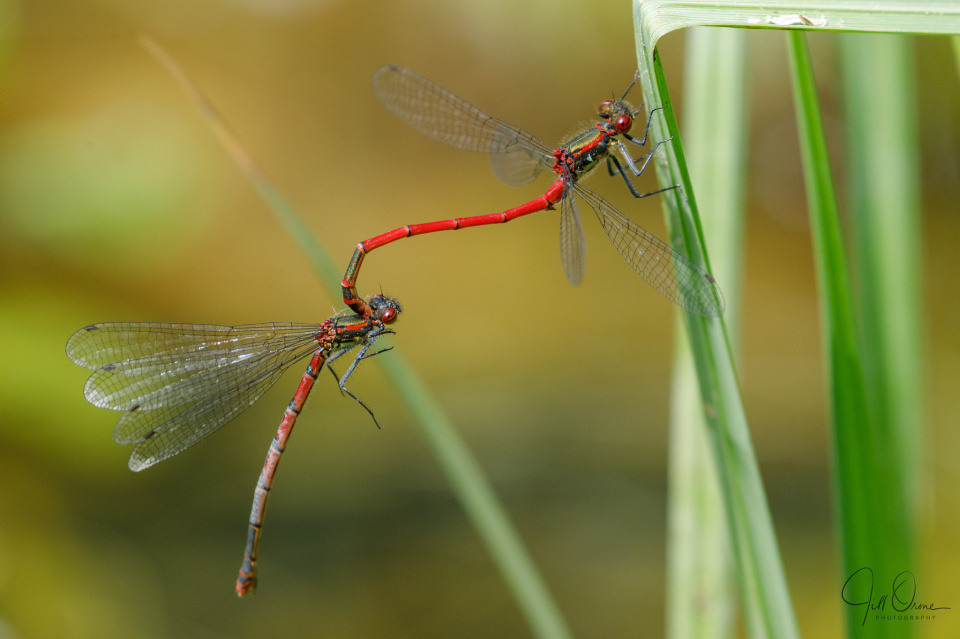 It was a much balmier day today, and there was lots of activity going on at the wildlife pond this morning. I went there laden with garden tools, intending to plant a hemp agrimony at the edge of the pond, but was promptly diverted onto photography when I spotted a pair of Large Red Damselflies ovipositing, with a lone male stalking them in the hope of supplanting the coupled male. I’ve added photos of the the three of them to my Facebook page, if you’d care to take a look.

After snapping that activity, plus some other nice bugs that were hanging around, I put down the camera and went to fetch some compost to improve the soil for the hemp agrimony. When I arrived back I immediately noticed this scene, so down went the tools again, and up came the long lens.

I’m fairly sure that this isn’t the female who’d been ovipositing in the water dropwort – she’s quite dirty, and quite liberally festooned with cobweb, whereas the earlier female looked to be in quite good condition. Nor does this look quite like either of the earlier males, though I’m less certain about that. What I am sure of is that this attempted mating was unsuccessful, despite his valiant efforts over several minutes to persuade her to engage. He swung her back and forth, and from time to time (as you can see in the extra) this did trigger what must be a reflex reaction, in which she brought her abdomen up towards his secondary genitalia; but she would always drop back down again without proper contact being made. Given that Large Red females are said to lay all of their mature eggs after each copulation, the most likely explanation for her reluctance is that she’d only recently oviposited, and it was unlucky for both of them that he jumped her before she could retire to the trees to eat and rest, and mature another batch of eggs. 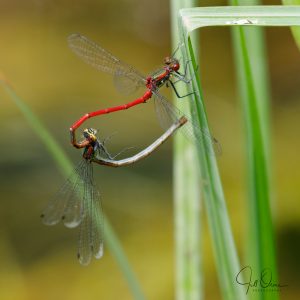 I was interested (and a little relieved) to see that in the end he simply gave up and released her, and they both flew away. In some dragonflies, most notably Southern Hawkers, ‘no’ is not an acceptable answer: I’ve seen some brutal encounters in which a male has subdued an unwilling female by biting her until she gives in and forms the mating wheel. The only strategy for a female Southern Hawker who isn’t ready to mate is not to get caught, and I once saw a female who was ovipositing in some reeds drop right down into the foliage and stay completely still for several minutes as a male searched for her. Clearly there’s no point in anthropomorphising, or trying to impose human values on an insect, but it’s quite disturbing to see this level of violence being meted out, and I’m happy that I didn’t have to witness anything like that today.

This afternoon R and I Zoomed with the Younger Generation, all of whom are looking well and happy. I forgot to mention yesterday that this week’s Lockdown Family Film Club offering was Thoroughbreds, which everyone else liked more than I did, I think – though I was interested to note that should I ever want to kill someone, Connecticut appears not to go in for any kind of crime scene investigation. So that might come in useful.