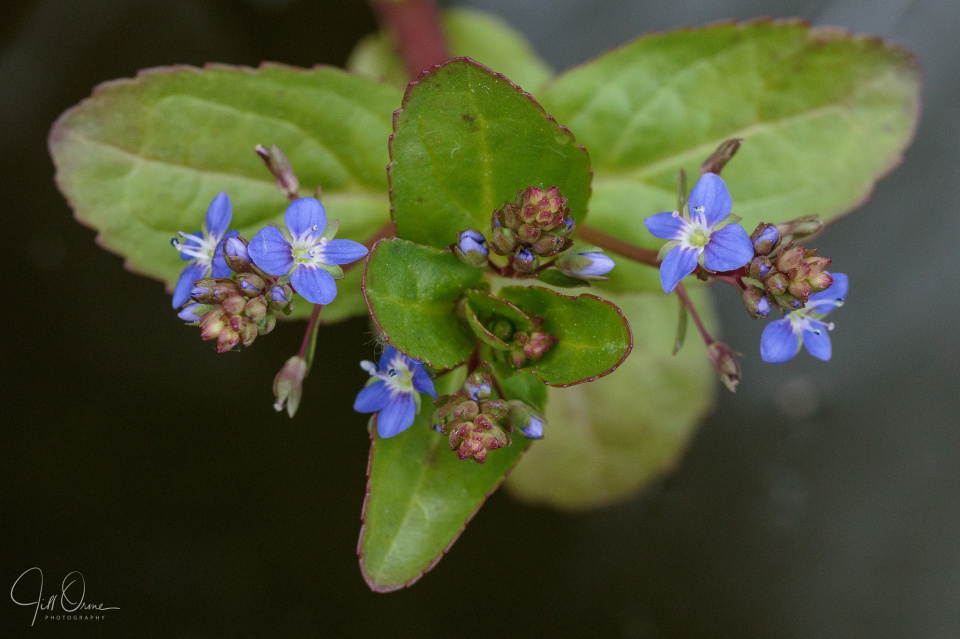 It was another very windy day, mostly overcast and with some episodes of squally rain. It definitely wasn’t a dragon day, so as I was in a bad mood anyway, I thought I might as well do gardening. R and I weeded the whole of the front garden (eeeurgh), and it would now look pretty smart but for the fact that the herbaceous plants are being torn and flattened by the wind.

The water level in the patio pond had dropped by a couple of inches due to all the recent sun and wind, and the rain we had today wasn’t enough to compensate for that evaporation, so this afternoon I topped it up from the mains. I’d prefer not to use tap water, but if I have to I think it’s better to do it before the level gets really low, so the newly introduced, chemically treated water is a low percentage of the overall volume. While standing by the pond with the garden hose I was admiring the tiny flowers on the brooklime, and thought they’d make a nice subject for a photo.

Veronica beccabunga is a native perennial, found growing wild at the margins of streams and in boggy ground. Its fleshy leaves can be eaten like watercress, though they’re said to be very bitter, and it used to be recommended for the prevention and treatment of scurvy, though it’s not actually particularly rich in Vitamin C. It is a valuable pond plant though, because it produces these pretty flowers throughout the summer, and its leaves provide shelter for insects, larvae and tadpoles (as well as a delicious meal for water snails, she said, through gritted teeth). Its leaves and stems are also favoured by dragonflies and damselflies for oviposition, which is obviously the most important thing of all.