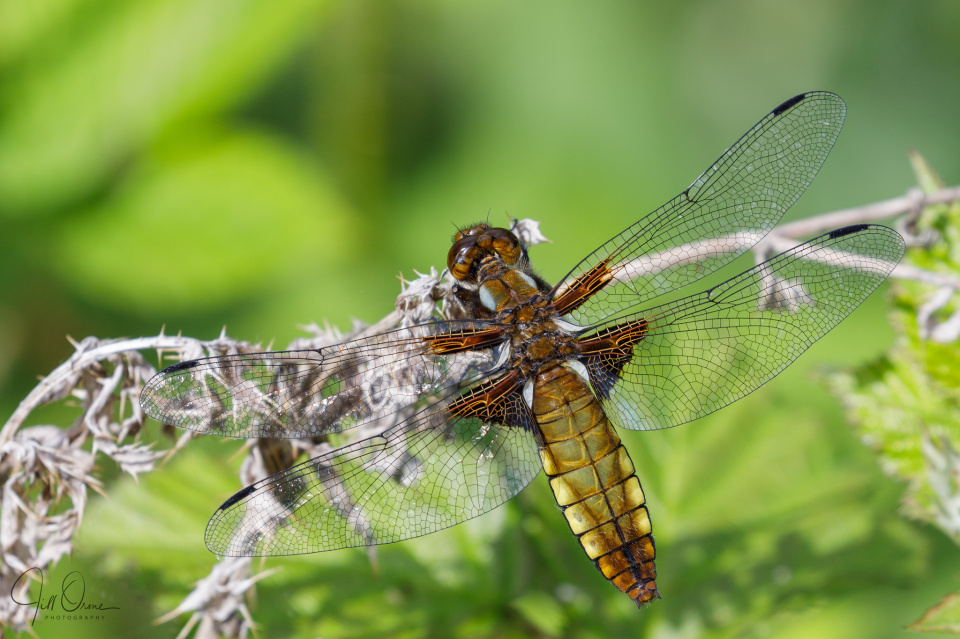 It was blowing a raging hoolie this morning, which isn’t the best weather for dragons. Nor is it ideal for visiting a heavily wooded reserve, so I was rather perplexed to find myself arriving at Grove Hill shortly after breakfast. Put it down to me being slightly gone out (as we used to say during my yoof), after a very disturbed night listening to the roof threatening to leave its moorings.

There wasn’t much going on at the small pond, so I allowed myself to be blown up to the top of the reserve – trying to stay as far away from the trees as possible – to see if the large pond was busier. A couple of circuits of the perimeter netted nothing more exciting than a few bees, but as soon I applied a little intelligence to the search and began looking for sheltered spots, I struck gold.

This female Broad-bodied Chaser was so fresh that I don’t think she was yet ready to mate; certainly she showed absolutely no interest in the males that were also hunting in the area, and for the most part they took no notice of her either. Whenever one of them did chance his arm (wing?) she took off like a rocket, but always returned a few minutes later, selected a different perch, and went back to sunning herself and making occasional hunting flights. Dragonflies don’t really go in for trust, for the obvious reason that they’re focused on trying to be the number one predator in their part of the food chain, rather than number two, but in the end she got so used to my presence that she let me come within macro range – although I’ve chosen a long-lens shot here because it’s given better background separation to the image. 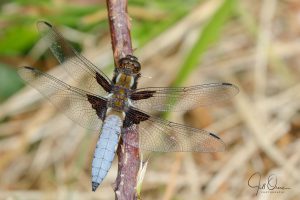 For comparison purposes, the extra is a portrait of one of the males. He is definitely old enough to breed, as you can see from the scratches on the sides of his abdomen, where a female’s claws have gripped him during copulation. Brooks and Cham would have you believe that the female looks like a large wasp – to which my response is: I’ll have a half-pint of whatever they were drinking at the time.