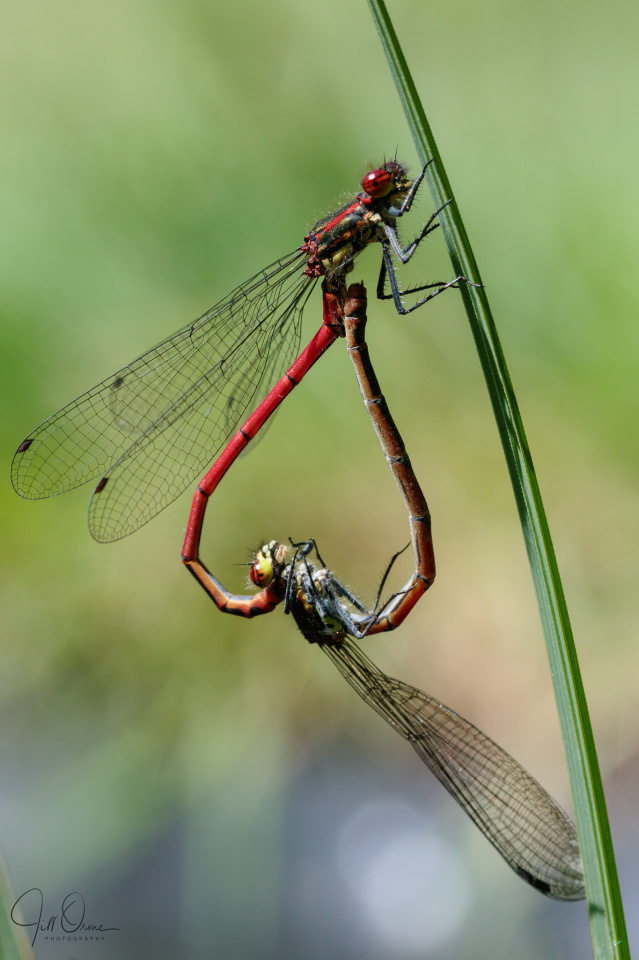 The Large Red Damselflies have really settled in to the garden now. Males were patrolling both ponds for much of the day, and occasional territorial disputes broke out. I was able to get in close to this couple this morning and photograph their mating wheel, but I had to go back to the house to take delivery of a parcel before they finished, and I didn’t see whether the resulting eggs were laid in the wildlife pond or not.

I was pleased to spot a couple of blue damsels down in the wild garden this afternoon, though they were less pleased to see me, and I wasn’t able to get close enough for photos before the Large Reds chased them away. As R pointed out though, it’s still early in the season, and there should be plenty more opportunities for me to stalk them.

I had been thinking of going out after dragons today, but for one reason and another the morning slipped away from me, and by the time I was free it was too hot and sticky for me to want to trudge around sunny places with heavy gear, so I stayed home and did a garden safari instead. I found some nice bees and hoverflies, a fourteen-spot ladybird, and a tiny longhorn moth, among other things, so I was pretty satisfied with my ‘bag’ for the day. Somehow though, the evening has slipped away from me too, and I’ve barely touched my processing; if I find any nice shots when I look at my files tomorrow, I’ll post them to Facebook.