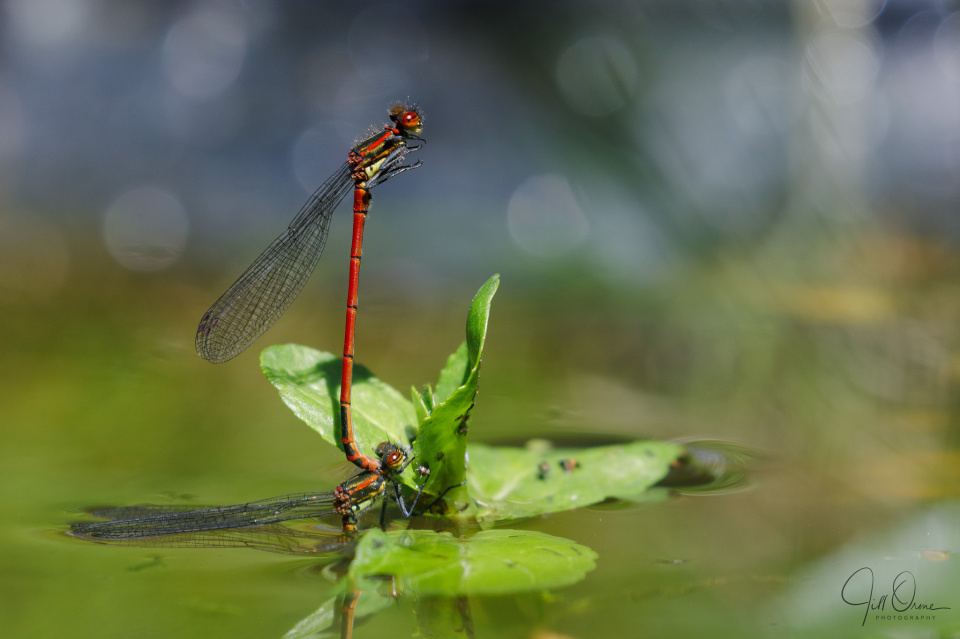 After a hot and sticky – and largely unproductive – bug walk around the village this morning, I retired to the wild garden with two cameras, some music, and my Kindle, and sat in the shade of the quince tree, reading, and keeping half an eye on the pond. Just a few minutes later I noticed a male Large Red Damselfly skittering around in quite an agitated way, and when I went to investigate I found that the cause of his distress was a mating couple, hanging from the pond sedge. You probably heard my triumphant whoop from wherever you were at the time, but in case you had headphones on and missed the moment, I’ve put a photo of the happy couple – and their voyeur – in the extras. 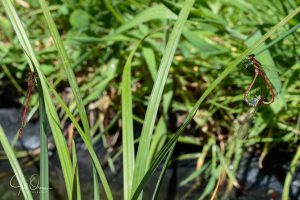 After they broke their mating wheel I had a few anxious minutes, because they couldn’t seem to decide whether to oviposit in our pond or fly off somewhere else, but eventually they settled and the female began to lay. According to Brooks and Cham, a female LRDF will lay the entire clutch of eggs she has matured in one session, if she isn’t disturbed – on average, around 350 eggs, but up to 750 if she hasn’t laid for a couple of days. This female certainly worked hard: I think over the next twenty minutes or so she visited every plant in the pond.

The male, on the other hand, managed to appear supremely uninvolved in the whole process, simply balancing on her thorax and maintaining his grip on her pronotum to prevent his rival from swooping in and supplanting him. As she sank deeper and deeper into the water here, I almost thought I could see her rolling her eyes. It was lucky that the frog wasn’t around, because she was highly vulnerable to attack from below, and the male would have been lucky to save himself, let alone her, if a predator had dragged her down.

After I’d photographed them from every angle I could think of (there’s another shot I rather like on Facebook, if you’d care to see it) I just stood and watched the rest of the oviposition, marvelling at the fact that this was happening six weeks to the day since R began digging out the hole for the pond. And then I stopped watching them and stared, open-mouthed, as a teneral female Banded Demoiselle fluttered past me in a gleam of metallic green and gold, and disappeared into the canopy of the oak tree. Later in the afternoon, what appeared from their behaviour to be a different couple of Large Red Damselflies flew in and laid a second batch of eggs. And then finally, a teneral blue damselfly – so fresh that it was still entirely pink – fluttered down and rested briefly on an iris leaf. I tried to creep up on it to identify it from the faint outlines of what will eventually be its markings, but it saw me coming and fluttered up into the trees, so I’ll have to be patient and hope to add it to my garden list another day.