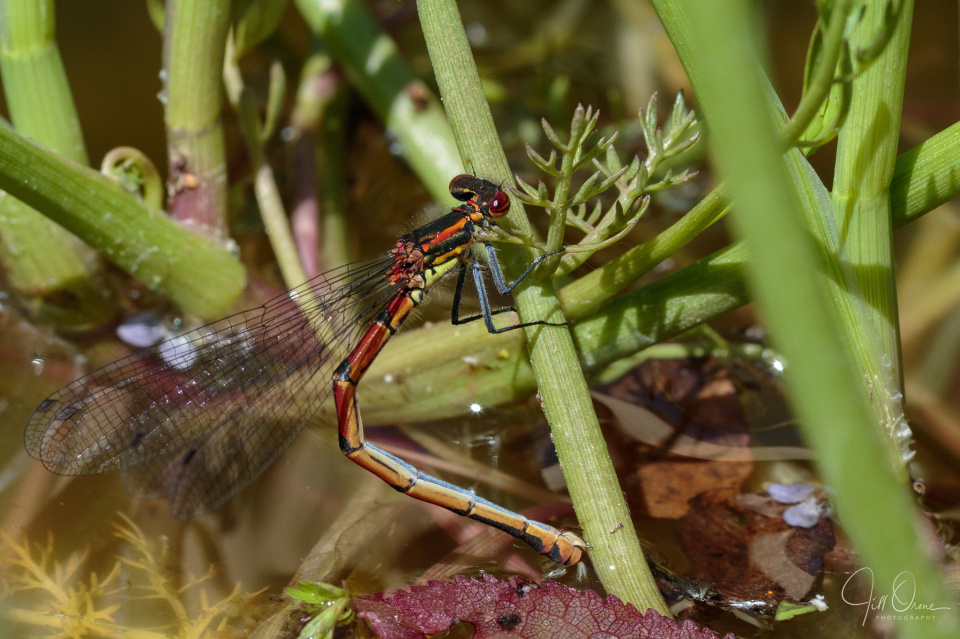 I was chatting to R out on the patio when I saw a Large Red Damselfly land on the edge of the patio pond. As I had the macro in my hand I went over and took a couple of record shots, but it wasn’t until I enlarged them on the back screen to check the focus that I realised it was a female, rather than the more usual patrolling male.

Far more surprisingly, she then dropped down into the pond and began ovipositing – something I don’t think I’ve ever seen an uncoupled female damselfly do before. The fact that she was alone made photographing her much more straightforward than if she’d been in tandem, partly because getting good focus on two insects at the same time is frustratingly tricky, and partly because males can be very alert to potential danger during oviposition, and will sometimes whisk their mate away from a prying camera. In this case I only had to worry about not disturbing her, and she didn’t seem at all threatened – in fact, she took no notice of me whatsoever. This allowed me to take a long sequence of shots, several of which I’ve posted to my Facebook page, if you’d like to see more.

I’ve since checked my books, both of which state that oviposition takes place in tandem, and I’ve been wondering what might have been going on here. If her mate had been predated while they were in tandem it’s unlikely that she would have escaped, because the male’s grip on a female’s pronotum doesn’t seem to relax if he dies (or even if she does: I once saw a male almost fall prey to a spider that had already paralysed his partner, only realising at the very last instant that he could simply let go of her and leave). It’s possible that after mating and laying some of her fertilised eggs she and her mate uncoupled and she then wanted to lay the rest; and it’s also possible, because she looks very fresh, that she hasn’t yet mated at all, but for some reason had an urge to get rid of part of her unfertilised egg load. Either way, I hope that having “marked” this pond it’s now on her mental map, and that she’ll return here to look for future partners. 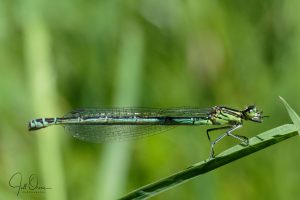 Meanwhile, the wildlife pond was positively humming with insect activity. At one point there were several competing sunflies, two male Large Red Damselflies, and two Azure Damselflies all bickering with each other over the water and among the plants, as well as the usual cloud of smaller flies and a few passing bees. Today’s extra is the first Azure Damselfly that’s allowed me to get within macro range in our garden – and interestingly it’s also a female, rather than the more expected male. This is a species that tends to stick to its natal water, though some individuals will disperse while still immature, which is obviously what’s happened here. If she’s chosen this pond now she will probably stick to it, but once she’s fully mature she’s unlikely to sit around at the margins grooming herself like this, and will probably only turn up here once a day, to seek a mate and lay her eggs.