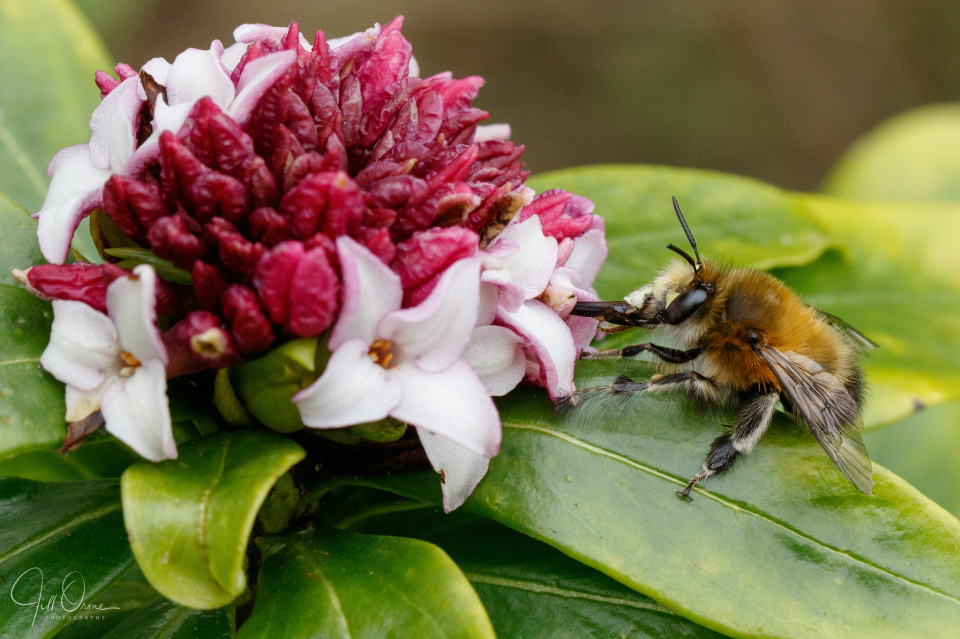 I thought that by now you might be bored with photos of hairy-footed flower bees feeding from pulmonaria flowers, so instead I present one feeding – with great style, I think – from a flower of my Daphne odora ‘Aureomarginata’. I’m quite pleased with this shot, and I’d love you to look at it full-screen, if you have the time.

The pale face of a male Anthophora plumipes is absolutely distinctive among British bees. Its strong markings give the bee almost robotic appearance, and when you see it flying in its typical erratic, hovering pattern, with its improbably long proboscis extended, you could almost think (if you were imaginatively inclined) that it had been sent back from the future to kill you. But these are entirely harmless insects – the males, at least, have no sting, and when involved in disputes with rival males over territory or favoured flowers, their only recourse is to bump each other like flying dodgem cars. I find them to be a little wary of me (not unreasonably, as they can’t know that I’m not a predator), but if I move slowly and don’t home in on them too quickly they’re also curious, and will often hover in front of me for a few seconds, checking me out.

This species, being among the earliest to emerge each year, is a very important pollinator of early spring flowers and fruit. Their long proboscis makes them particularly well adapted to feed from tubular blooms, and you’ll most often see them on pulmonaria, wallflowers, primroses, dead-nettle and ground-ivy. They also feed on blackthorn, cherry, apple, and plum blossom.

I’ve yet to find a female in my garden, but – like the numerous males who were zooming about the place this afternoon – I’m keeping a close eye out, and I’ll bring you a photo as soon as I manage to track one down.